Over the years I’ve noticed people have very different attitudes to problem resolution. 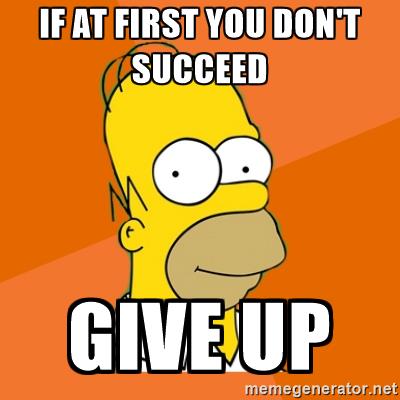 For some people the first hint of a problem leads them to believe what they are trying to do is impossible. I remember having a discussion with a former colleague about their solution to a problem. When I asked why they used a particular approach they said, “I tried to do it one way but it wouldn’t compile, so I used this approach instead.” I kid you not! Something as simple as a compilation failure was enough to make them lose confidence in their approach. If I changed tack every time something didn’t compile I’d never finish anything. 🙂

When you are trying to get to grips with something new it can feel a little like you are banging your head against a brick wall at times. When it gets like that you have to take a step back and ask yourself whether you have exhausted all the possibilities. In my case, I often get into this state because I’m in the weeds and I’m rushing to complete tasks. I believe I’ve tried every possibility, but actually I’ve missed out something, or tried two things at once (to “save time”) that cancelled each other out. I have to ask myself, “What was my last good state?”, switch back to that point and start again in a more controlled and meticulous manner.

It’s a bit like looking for “lost” keys. You convince yourself you’ve checked everywhere and can’t find them, then eventually you start from scratch and search properly, only to find them sitting on your desk in the usual place, but with a solitary piece of paper over them. 🙂

I’m not saying you should keep banging your head against a brick wall forever, but you have to learn tactics for solving problems, one of which is being honest with yourself. Have you really tried, or did you just make a quick stab at it then give up?

If you’re a follower of the blog you may be thinking I’m going to say something about people having a passive approach to learning and not taking personal responsibility for their own development, but I’m not going to. 🙂