The Oracle Database 12c Release 2 (12.2) learning process continues. I’m determined to get to the bottom of all this new multitenant stuff. 🙂

So the last one is actually for 12.1, but I hadn’t written about it already, so I added it.

I also updated this article to include the “CONTAINERS Hint” feature functionality.

There is a new feature listed in the docs as as “Support for PDBs with Different Character Sets, Time Zone File Versions, and Database Time Zones in a CDB”. I’ve already written about the PDB character set stuff and it is also listed separately as a new feature. The time zone stuff works in 12.1, so it doesn’t appear to be a 12.2 new feature. The different Time Zone File Versions functionality, as far as I can see, relates to OCI client connections to the server and was introduced in 11.2. With all that in mind, I’m really not sure what this listed new feature specifically relates to. If someone can clear that up for me I would be really grateful, as I’m wondering if I’ve just missed the point somewhere. 🙂

I’ve continued playing with some of the new multitenant functionality in Oracle Database 12c Release 2 (12.2).

This article is not a multitenant article as such, but you can use the functionality in a PDB. 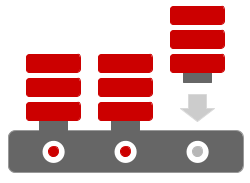 It’s been over 2 years since 12c was released and there still seems to be a lot of confusion about the pluggable database stuff. I think most people know the top-level concept, there’s only so many times you can see the memory stick analogy before it gets burned on your skull, but that doesn’t do much to help with the reality of working with it day-to-day.

I’ve written a whole bunch of articles on pluggable databases (listed here), but even then I think there is quite a bit of text for what in many cases is a feature that consists of a single statement. 🙂

I’ve recently been pushing out some videos on this stuff and I’ve got some more already recorded for release while I’m at OOW. Of course, the articles allow you to copy/paste your way through an example, but I think the videos give a more accurate representation of just how simple some of this stuff is from a functional perspective. If you are interested, all the multitenant stuff will be added to this playlist as it is released.

I forgot to mention, I put another multitenant article live at the weekend.

I’m not sure I will ever use it, but it’s good to know it’s there.

I was originally working on an article on a completely different multitenant feature, but the examples I was using highlighted a bug, which kind-of scuppered that article. I’ve raised an SR and I’m waiting on the acknowledgement and possible fix. I’ll hold that article back until the fix is in place.

After yesterday’s to PDB or not to PDB post, I decided the answer was “to PDB”. Here’s what I did…

Job done. So far it’s looking good. I’m going to do some messing about tomorrow to make sure it registers with Cloud Control properly and the backup schedule is sorted. Then I’ll give it to the folks to test their apps against.

So it was kind-of exciting, fun and scary all rolled into one… 🙂

I’m about to start a Proof of Concept (POC) for a 12c upgrade of one of our databases. The production database in question is running on Oracle Linux inside a VMware virtual machine, so the starting point I’ve been given for the POC is a clone of the whole VM…

Probably the biggest decision I’ve got to make is “to PDB or not to PDB” *. I mentioned it on Twitter earlier and got some conflicting opinions. I guess the pros and cons of the PDB approach go something like this in my head.

I don’t think there is really a right or wrong answer in this debate. I could probably put forward a convincing argument in favour of either option. I’m leaning on the side of the “to PDB” choice. If this proves to be a no-go, then I’ll start a POC of a pre-12c style instance… 🙂

Despite my leaning for the PDB choice, I am interested to know what others think, especially those that have done something a bit more extensive than running this stuff on their laptop. 🙂

* I forgot to mention previously, we will almost definitely be going with a single PDB per CDB (the free option) initially. So this is not a “consolidate using multitenant” issue from the outset.

When I wrote about the remote cloning of PDBs, I said I would probably be changing some existing articles. Here’s a change I’ve done already.

There are also new articles.

As I mentioned before, the multitenant option is rounding out nicely in this release.

I mentioned in a previous post that I would be revisiting some of my existing multitenant articles to include some of the features introduced in the 12.1.0.2 patch. Here’s one of them.

Not only have Oracle fixed the bug in 12.1.0.1 that prevented the remote cloning, but they’ve also added the ability to clone directly from non-CDB style instances, giving you another option for migrating from non-CDBs to PDBs. Pretty darn cool if you ask me! 🙂

Some more stuff will be amended over the coming days. If the changes result in some major rewrites I’ll probably blog about them. If not, I’ll just slip them into the articles and make a reference to the fact the specific feature was introduced in 12.1.0.2…

From a technology perspective, the Multitenant option is really cool, but it can be rather difficult to get to grips with some aspects of it. Everything is so intertwined and every feature in 12c somehow links back to the Multitentant option. As I’ve been working my way through the features the same pattern keeps repeating.

This pattern has made me rather reluctant to post anything on the blog about new articles, because although I don’t release articles until I think they are finished, all these Multitenant articles feel very much like a work-in-progress. I fully expect to step back and revise/rewrite all of them as I figure more out about this stuff.

The first link is not so much an article, more of a links page. I originally wanted to write about Multitenant as a single article. Looking back now that is quite laughable. Ten articles in and I’ve barely scratched the surface. As I keep adding more content, I’ll keep adding it to the overview article, so it remains the index page for the option.

I’ve said it before and I’ll say it again, it’s going to take a long time to get fully up to speed with this option, so you really need to start learning about it now!