We arrived at Trinidad & Tobago in the evening and it was hot and humid. I decided to wash some clothes in the hotel room sink, which was a mistake. It was so humid that even after about 36 hours my clothes were still damp and smelled a bit like wet dog when I packed them. Asking around it sounds like Guatemala will be just as humid, so I might have to use a hotel laundry service to get my clothes clean. 🙂

The timetable was such that I really didn’t get to see anything of Trinidad & Tobago. The whole of the first day was taken up with the conference. It was a single track event, so every presentation was to the whole audience. I was the first speaker, so I did a quick poll of the audience and decided to switch from my intended presentation to a more general one, so as not to alienate all but 5 of the audience. 🙂

The previous events were using translation services, so I had been constantly trying to speak slower. Presenting to an English speaking audience should have made it easier, but I found myself rushing a little. You gotta laugh. I’m never satisfied. 🙂

When the event was over a few of us went next door to the Hyatt Hotel and sat on the terrace chatting for a couple of hours. I had a Hyatt Sunrise and a Toasted Almond Joy, both of which were very sweet and a little alcoholic. 🙂 Sheeri and I had agreed to present at a separate event the following day, so we were discussing the event with Loren (the organiser). When I heard the audience was made up of students I decided none of my presentations were suitable, so it was back to the hotel to write something new. I got most of the outline done before bed and (almost) finished it in the morning. I spoke to Debra Lilley at breakfast and she gave me a couple of ideas, which I added when I got to the event.

I like to rehearse my presentations a lot, so doing an on-the-fly presentation like this was pretty scary for me. I was really pleased with the way it went. I feel like it flowed well and the response from the audience was good. If anything, I feel like it went better than my presentation from the previous day. During the presentation I made some comments about documenting code and systems, so when I finished Loren asked if I could do a short presentation about documentation. I figured “in for a penny, in for a pound”, so while Sheeri was presenting I wrote some slides. As soon as Sheeri was finished I did a 20 minute spot on documentation. Two unplanned presentations in one day is about as much as my tiny brain could cope with. 🙂

Soon after our sessions were done, we got a taxi to the airport for our flights to Guatemala. The crammed timetable meant all I really saw of Trinidad & Tobago was:

I’m not sure I can count this as a visit to the carribean. It’s a bit like saying you’ve been to a country when all you’ve done is a wait at an airport for a connecting flight. 🙂

The timetable for Guatamala suggests it’s going to be a similar story there. Such is life!

Thanks to Loren and the gang for organising the event and of course, thanks to the Oracle ACE program for making it all happen.

PS. I’m looking forward to getting some sleep. I’ve kinda forgotten what it’s like…

PPS. I don’t have many photos, but what I have are here.

Getting to Ecuador from Colombia was really quick and easy. I think the flight time from Cali was about 45 minutes. 🙂 We arrived late in the day, so it was bed and straight to the conference.

We had a little car trouble on the way to the venue, so we were a little late. Fortunately my laptop was ready to plug in and go, so that’s what I did. I think the translators got an easier time during this conference, because I got the speed of my presentations about right. Both talks went well and I got to speak to a lot of people between sessions. I also got to do an interview for the user group and a local computer magazine. I was famous for 15 seconds in Quito. 🙂

On the evening we went for a tour of Quito. Unfortunately I forgot to take my camera, so I just have a few very bad shots from my phone. I’m sure you’ll see some great shots from other people on the tour though.

The following day we took a trip to see a volcano crater, a big market and the equator. 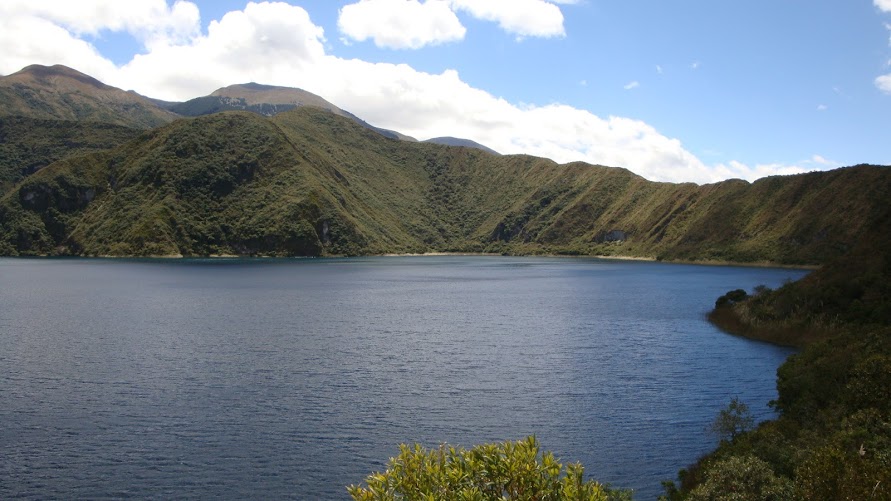 The trip to the equator was a real bonus. It’s odd to think how happy it made me to stand on this line. 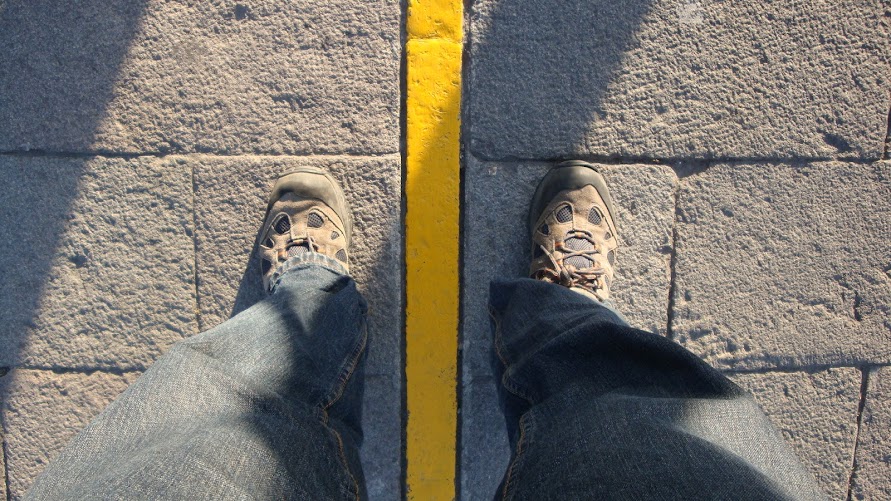 I even got a bit over-excited and did a couple of tricks. 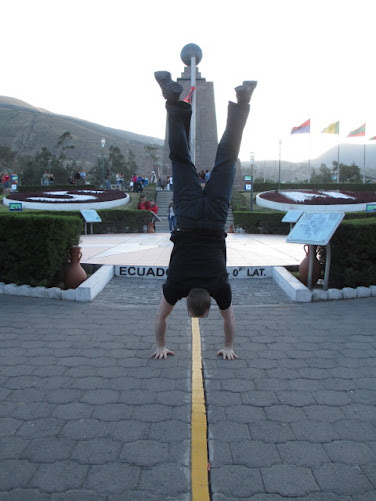 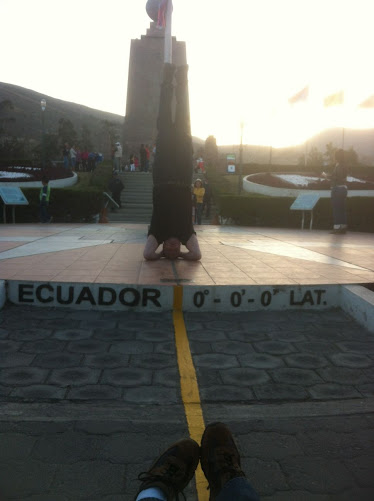 I’ve made some of the photos available, including some I “borrowed” from other people on the tour. 🙂

Once again, a very big thank you to Paola, the tour organisers and the ACED program for making this trip happen. Latin America is definitely a great place to visit!

In a few minutes I’m off to catch a flight to the next location. It would be really nice to get some sleep some time soon! 🙂

Update: I just found this video interview from this event. It makes me laugh. I’m trying so hard to speak slowly and clearly I can see myself straining, then visible relaxing at the end of each sentence. 🙂

Let me start by apologising for spelling Colombia incorrectly on previous posts. I think I’ve corrected all the mistakes (I hope). Also, the name of the tour doesn’t really reflect the actual locations, since it contains two South American, one Caribbean and three Central American countries. I’ve heard multiple names for the tour, none of which are quite correct for all the countries involved, so I’m going to stick with this name for the sake of consistency. Once again, sorry if any people don’t like the tour name…

Update: I switched to “Latin America”, since this fits more of the countries (5/6). 🙂

I was sent a bunch of security notices before traveling to Columbia and I must admit I started to feel very nervous. As it turned out I had nothing to be worried about. Like most places around the world, if you are naive you can get into trouble, but if you take sensible precautions you will be fine. During my stay in Cali I had a great time and never once felt unsafe.

One of my lasting memories of Cali will probably be the fruit. I ate (and drank) loads of fruit. It just tastes so good! 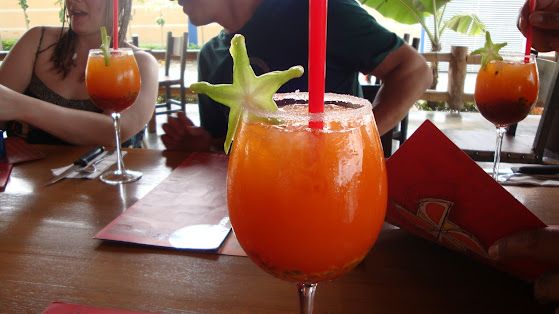 The conference went really well. It’s always a little scary using a translation service, because I talk so fast normally. I tried really hard to keep things slow and not waffle too much. I hope I managed it. People were a little reluctant to ask questions in the sessions, but several people came up to me later to ask questions after each session. 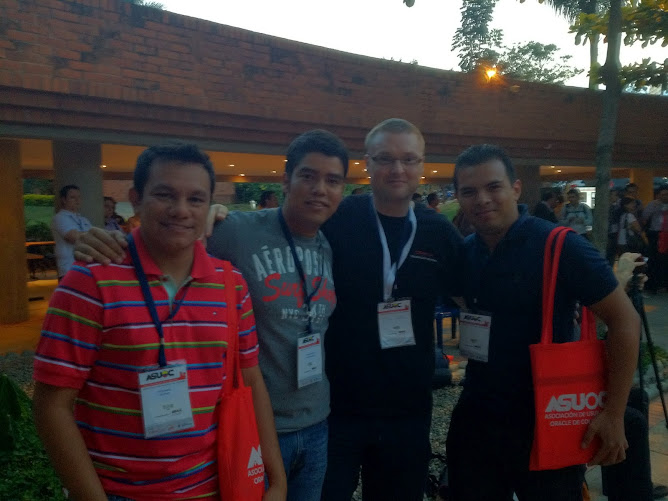 Robin was a great host and made sure we had a good time. I’d like to send a big thank you to him and everyone else at the conference that made it go so smoothly. Also a big thank you to the ACE program and the tour organisers, without whom this would not be possible!

I’m not too great with a camera, but I did take some photos.

The journey from Birmingham to Cali (Colombia) was very long!

It started with a quick flight across to Amsterdam and a 1.5 hour wait for my connection to Panama. The flight to Panama took about 11 hours. It wasn’t a bad flight, but it felt super-long because I knew it wasn’t the last flight of the day. I had a 4+ hour wait at Panama for the final flight to Cali.

Panama airport is pretty small and not really the place to hang around for 4 hours. Just about the only entertainment was watching the “junk in the trunk” that was on display everywhere. I don’t think I’ve ever seen anything like it before. It seemed like everywhere I looked was something that made Jennifer Lopez and Beyonce look like they had flat asses…

The final flight to Cali was over pretty quick. I landed and there was a guy waiting to take me to the hotel. I checked in at about midnight, and got to bed at about 01:00 local time, making it a very long and tiring day. Unfortunately, I woke at 04:00 and I’m typing this at 05:30. Today is the beginning of the jet-lag wars… I must remember to grab any opportunity to sleep, no matter how small.

Tomorrow (Monday) is my Birthday and also the day I fly out to Colombia to start the OTN Tour of Latin America. On the positive side, the timezone changes make my birthday last quite a few hours longer. On the negative side, I’m going to spend 14 hours in a plane and 8 hours in airports. Good job I don’t really do Birthdays…. 🙂

I’m still feeling quite nervous, because it’s a complicated trip. I’ve been delaying packing a long as possible, because packing is the sign that it’s really happening. I’m out all day today, so I will have to do some adrenalin packing tonight or early tomorrow morning. Adrenaline packing is always the best approach in my opinion. 🙂

Not surprisingly, two and a bit weeks on a plane will make me pretty slow at answering questions, so please don’t have a cow if I take some time to respond. Remember, you get what you pay for and I do this for free. 🙂