To get build 10049 you have to switch the Windows Update settings from “Slow” to “Fast”, which gives you access to the latests builds as soon as they are available. 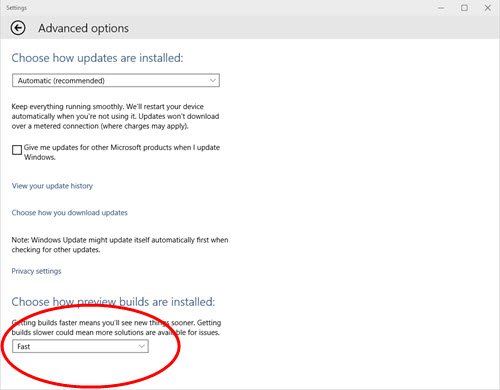 That done, Windows Update will then download build 10049, which is pretty much a full OS download again. Once rebooted, the OS auto-installs for ages, with a few reboots, but when it is done you are left with the latest Windows 10 build.

It boots to the desktop and feels quite similar to Windows 8.1. If you are interested in the latest start menu, here it is. 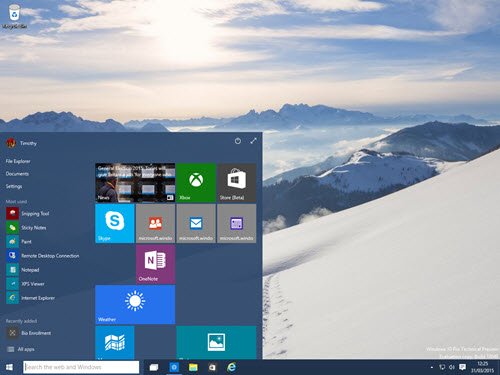 Most importantly, THIS IS SPARTA(N)! 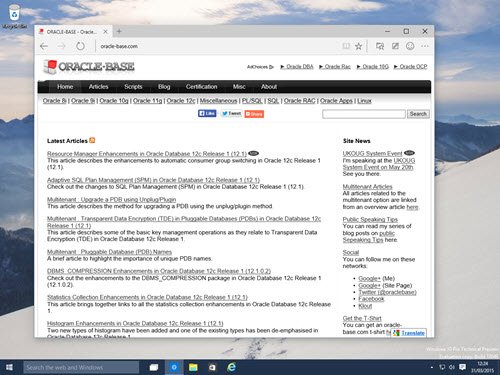 Not surprisingly, it’s a just a browser and any site that sticks reasonably close to the standards will work fine.

So that was the fun bit. Now I’ve got to look at what this is going to break. I’m guessing Oracle Forms isn’t going to like it. 🙂

PS. Alex – By “and junk” I was not implying it is junk. Este Uimitor! 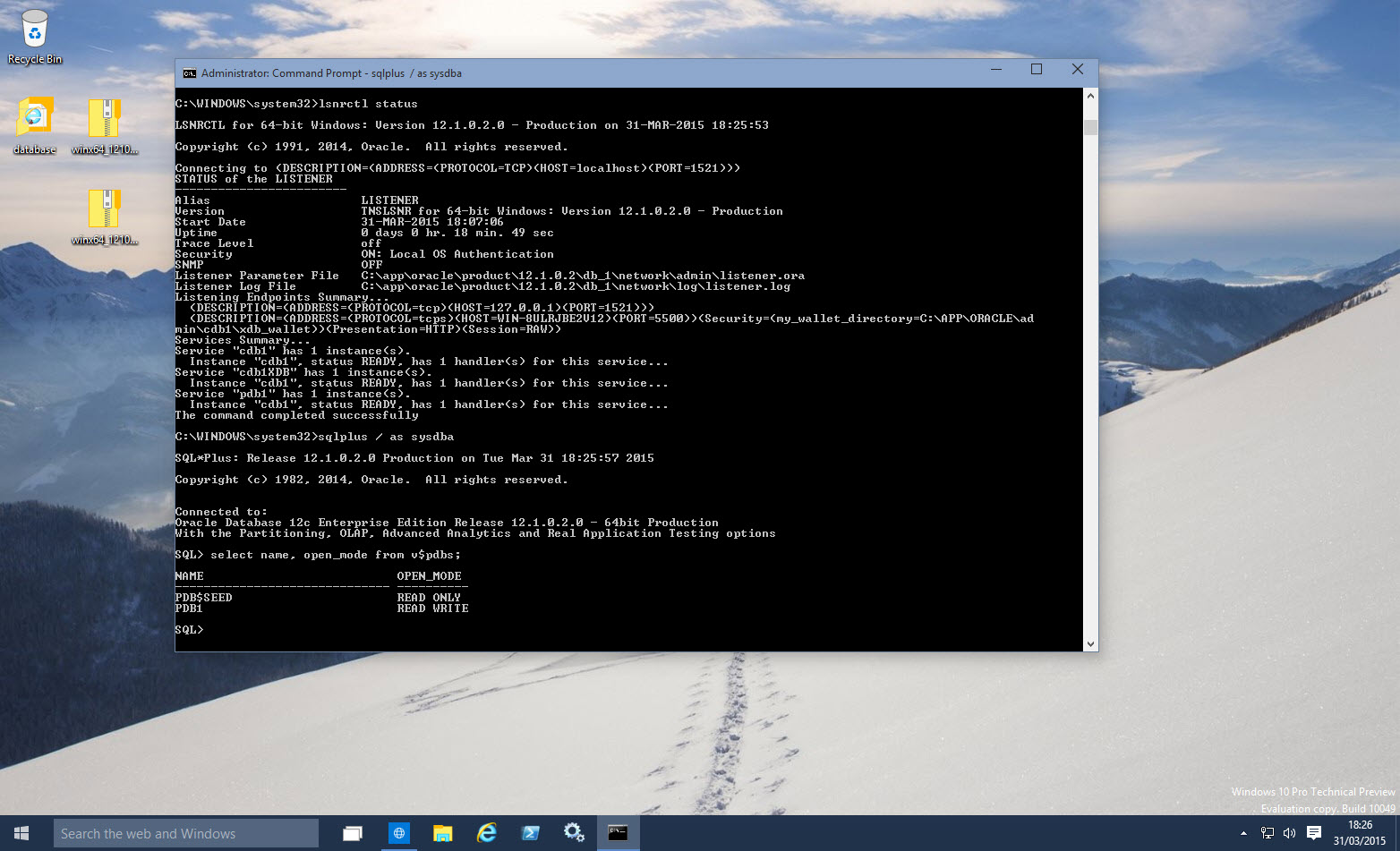 Mary Ann Davidson wrote a great piece on her security blog today, which basically talked about focusing on the important vulnerabilities, not necessarily the ones that get the most press. Added to that, the risk associated with a vulnerability may well be different for you compared to everyone else, depending on how your system is used. I agree with what she is saying, but I’m going to take a slightly different angle on the subject.

Over the years I’ve come across lots of different attitudes to database patching from management and DBAs. As more DBAs are now involved in looking after middle tier products like WebLogic, some of those attitudes to patching have moved into that world too. It seems to break down into three camps.

Patching is not just about security.

Choosing not to patch is not really an option these days. Your company has to understand this and allocate the correct amount of resource to getting it done. That might mean more staff resources allocated to patching and subsequent testing (rather than doing “productive” work), outsource the work where you can or moving to cloud services where regular patching is part of the deal.

I’ve just found out I’ve got a paper selected for the UKOUG System Event on May 20th. Check out my badge. 🙂

I was a spectator at last year’s event. At first glance you might think much of the content is not directly related to my job, since I’m not a system administrator, virtual infrastructure administrator and I don’t use any Oracle engineered systems, appliances or storage products. Having said all that, it’s hard to be a DBA these days without having a finger in several pies. Most of the information discussed at these events is relevant, even if you are not using the exact same kit or doing the exact same job as the speaker.

Hope to see you there.

Every so often I have a nose around the contents of the Oracle Linux public yum repositories and guess what I found in the OL7.1 base and OL7 latest repositories.

The datestamps suggest they’ve been around since the 5th February, but I think these only became available with the release of OL7.1.

On the positive side, this means installations of 11g and 12c just got a whole lot easier on Oracle Linux 7. On the downside, I’ve got some minor rewrites to do. 🙂

As mentioned in a previous post, when I was at Birmingham City University (BCU) speaking at the UKOUG Next Gen event, one of the lecturers saw me and subsequently asked if I would come in and do some technical talks for the students. I did the first about a month ago. Yesterday I had the morning off work to pop across to do another talk.

This talk was on virtualization. It’s based on the slides for my “Cure for Virtual Insanity” session, but I frame the subject a little differently and skip some of the content. I like doing this talk. It’s not too heavy and it gives an introduction into virtualization, which links into the current batch of DBaaS cloud offerings. I think it’s good for people to understand some of the building blocks their “magic” cloud services are built on. 🙂

I feel like the talk went well and I got some questions, so people must have been paying attention. 🙂

Afterwards I chatted with the guys about the session and more generally about how to move this guest speaker thing forward. If everything goes to plan I will be doing 4-6 of these sessions per year. I think it’s great how they are looking for feedback from external people and companies to help develop their students. It’s not like the antiquated approach lecturers used when I was at university. 🙂

After saying a quick goodbye to everyone, I got in a taxi and headed for the airport. I was a little on the early side, but as I’ve said before, it’s better to be early than late where airports are concerned. I wanted do have a Guinness in the bar in the airport, like I did with Patrick Hurley last year, but the queue was too long, so I settled for an authentic Irish diet coke instead. The flight home was a little less “eventful” than the flight out. I arrived in Birmingham at about 23:00 and after a taxi ride home, was in bed by 00:00. So all in all it was a 20 hour day! 🙂

Dublin is seriously easy for me to get to. It is cheaper (£27 return) and easier (40 mins) for me to get to Dublin than it is to get to London. I did spot one of my fellow Oracle Midlands folks there, who had also flown in for the day to check out the conference. It’s definitely worth considering the trip! This event is now one of my staples for the year!

Thanks to the folks at OUG Ireland and UKOUG for getting the event up and running. Thanks to all the attendees and speakers for turning up. Without you it would not happen. Even though this was a self-funded event for me, I would still like to thank the Oracle ACE Program for letting me fly the flag!

See you all next year!

Having got to OUG Ireland, here’s what happened…

The first session I got to see was Nikolay Kovachev from TechnoLogica speaking about “12c PDBs, Snapshots & Change Management”. Bulgaria in da house! The session started with an intro to ZFS (snapshots, copy-on-write (COW), clones), then a quick intro to the Oracle multitenant architecture. From there it was on to PDB snapshot cloning using ZFS. Because of the ZFS COW functionality, this is really quick. Similar cloning times to Clonedb. From there is was on to Cloud Control 12c Change Management, using the lifecycle management pack. After doing that, it was demo time, with a demo for everything covered in the session. Even with the power of modern day laptops, I am always nervous of live demos of Cloud Control. It’s resource eating beast… The ZFS and cloning demos worked fine, but there were some issues with the change management pack demo because of the amount of stuff running on a single laptop. It was a pity, but such are the joys, and pains, of live demos. I’ve been there myself several times. I definitely need to spend some time looking at the snapshot clones of PDBs in 12c.

My first sessions was “Pluggable Databases : What they will break and why you should use them anyway!” When I did this at Oracle Midlands #8 it was described as scary by a couple of people. I tried to lighten it a little this time, so I hope I didn’t scare anyone. 🙂

After my first talk it was off to lunch, where I got to meet up and chat with a bunch of people, which is really the best part of any conference. Can we have the soup in mugs next time please? 🙂

Next up was Marcin Przepiorowski from Delphix  speaking about “How To Avoid Boring Work – Automation For DBAs”. When I tweeted this one of the replies asked if it was a Delphix sales pitch. One of the things I like about companies like Delphix, Dbvisit, Enkitec and Pythian is they send people out to conferences without forcing them to do the hard sell. Marcin is a Delphix employee, but this session wasn’t anything to do with Delphix. It started off with examples of using Cloud Control to automate tasks, then moved on to using Ansible. I’ve not used Ansible, but it looks pretty neat for automation of tasks across your whole server real estate. It’s on my to-do list.

My second session was “A Cure for Virtual Insanity: A vendor-neutral introduction to virtualization without the hype“. I was kind-of expecting nobody to turn up to this session as there was a whole bunch of great sessions on at the same time and it wasn’t directly about Oracle. As it turned out I was pleasantly surprised. I like doing this session. It’s quite light and fluffy, but allows me to dispel some of the FUD associated with virtualization.

Next up was the closing keynote by Maria Colgan. Apparently, the In-Memory Column Store is a software version of walking into a pub, standing on the bar and asking which of the blokes is suitable relationship material. I tried this once and couldn’t walk straight for days. 🙂 Maria also picked up her UKOUG lifetime achievement award for winning the best speaker prize three times. This means she can no longer be selected as best speaker, which makes it that much easier for the rest of us… 🙂

After the closing keynote it was drinks and nibbles then the event was over.

The day started early, about 1 hour before my alarm in fact. I got up, lay in the bath for a while drinking a can of Monster and considering the day ahead, got out of the bath, puked, then got my shit together ready for the taxi. I’ve been ill this week. That combined with sleep deprivation, nerves and the Monster kinda turned my stomach.

The taxi ride to the airport was really good. The driver was a really cool bloke and I enjoyed talking to him.

I arrived at the airport with a couple of hours to spare. It’s a bit silly for such a short flight when I have to check in online and I only have a laptop as baggage, but I would rather be early than late for my £27 flight to Dublin. 🙂

We got seated in the plane and were told we had a 60 minute delay. One guy started to freak out. It was like an episode of the Jeremy Kyle show. I was waiting for someone to come in with the DNA results, to prove he was not the father of the baby etc. No punches were thrown…

We ended up taking off about 50 minutes late. My first session was after 12:00, so I wasn’t too worried. The girls next to me used the time to do their make-up. Apparently it takes about 40 minutes to achieve “the natural look”. The combination of that, the selfies and the giggling about stuff on Snapchat made me feel very old!

On arrival it was a quick taxi ride to Croke Park, then OUG Ireland started for me.

VirtualBox 4.3.26 has been released. Downloads and changelog are in the usual places.

It’s only a couple of weeks since the last release, so I guess there was something causing people significant headaches, which warranted a new release. Not that I noticed any problems. 🙂

Just read the news that Sir Terry Pratchett has died. Made me think of this line from a song called And On by Yazoo.

Thanks for the many happy hours I spent in the world you created!

To steal another line, this time from the comments on the story from The Register.