Just finished my session. What a nightmare…

I was surprised anyone turned up as it was a late change to the schedule and there were some great sessions going on at the same time. Check out the photo. 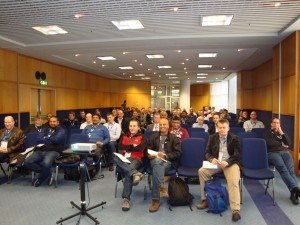 It was kinda OK, until I got to the demo, which I screwed up. That was really disappointing because it really was the crux of the session. I thought I saw the issue and tried to salvage it, but it failed again so I gave up and moved on. I would like to say it was an OK recovery from a disastrous demo, but that would be a lie. Flipping crap.

Quite annoyed with myself because I know why it got screwed up. When I was in Bulgaria somebody asked me a question and I messed with the demo to prove a point, but forgot to repair it afterwards. Of course, it works again now that it’s too late. 🙁

There seemed to be some real interest in the technology and I assured people that the demo screwing up was noting to do with the tech, it was totally my fault.

So not the best showing I could have put in. I think it is summed up nicely by this tweet,

“session clone db is a mess”

If anyone wants to see the running demo, drop me a line on twitter (@oraclebase) and I’ll meet you and show it working. If not, check out the article here.