The most important part of the evening was the opportunity to win an Oracle Press teddy bear. 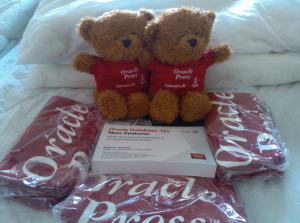 Oh yeah, there were a couple of talks too…

I was planning to arrive early and go for a quick drink with my dad, but the Birmingham traffic put that plan to rest. Instead we just chatted a bit before the event started.

First up was my dad (Graham Wood), who dropped by on his way to the UKOUG Real World Performance Day in London, speaking about “Advanced ASH Architecture and Usage”. I’ve seen Graham doing this presentation a few times, but each time something new jumps out at me. If Graham came back next week and did the same talk, I would still go and watch it. Every year that goes by I find myself using AWR reports and SQL Trace less and less because I can get the information I need out of ASH.

After saying an emotional farewell to Graham, I drowned my sorrows in vegetable samosas and chatted to people, including Martin Widlake, who I assume was lost since he’s not from round these parts… 🙂

Next up was Nikolay Manchev, who drove up from London to speak about “Using Clusterware 11g to protect single-instance databases”. This was essentially using Oracle Clusterware to mimic RAC One-Node without having to buy a RAC One-Node license. Almost the whole of this presentation was live demonstration. I love doing demos, but I don’t think I am brave enough to do live demos of Oracle clusterware and failover etc. To much to go wrong on a little laptop. Nikolay laughs in the face of danger and jumps right into that stuff. 🙂 He had a couple of little hiccups with the projector not playing well with his laptop, but he got through the demo and his cold failover of the database, listener and VIP worked just fine. Neat! 🙂

After the event was over, a few of us wandered over to a nearby pub and sat chatting for a couple of hours more. 🙂

All in all a really cool event! Here come the thank you messages.

The next event should be on May 20th, with Christian Antognini doing both sessions. Christian is the author of probably my favourite technical book, Troubleshooting Oracle Performance, so I’m really looking forward to this. You never know, you might get to win the second edition of this book, which must be about to arrive… 🙂 Keep an eye on the Oracle Midlands website for registration information.