OpenWorld 2014 was dominated by jet lag. Not that “special” type of Doug Burns jet lag, but the real stuff. As I mentioned in a previous post, having been ill in the 3 weeks leading up to OpenWorld, the jet lag hit me hard and I had nothing in reserve to get me through it. I’m now back in the UK and it is even worse. It’s 01:00 as I write this and I’ve been to sleep for about 3 hours. I’m now wide awake. It’s going to be a long day!

Apart from the jet lag, what was the overall message at OOW14?

This one was pretty predictable. What broke away from the message of previous years was the Infrastructure as a Service (IaaS) message. In previous years Oracle said they were not interested in IaaS as competing with the general cloud providers, like AWS, was not good business. As Mark Rittman put it, this is “a race to for the bottom”. Instead, Oracle wanted to focus on the Platform as a Service (PaaS) and Software as a Service (SaaS), where they are selling their technology stack and software respectively. This has much better margins and allows them to do something that other cloud providers can’t really compete with in a price fight.

In reality any PaaS provider needs to also provide IaaS because applications do not work in isolation. It may be nice to have your Oracle database on the cloud, but what do you do with that 3rd party application that you would like to run in the same data centre as the database?

Oracle have come out with a statement that they will provide general purpose compute power and not be beaten on price by the likes of AWS. That sounds quite scary, but I think the reality is this will only be a small part of their cloud business. I would imagine most people moving to the Oracle Cloud will be doing so for the PaaS and SaaS offerings. The IaaS will only play a supporting role.

In more general terms, Oracle are planning on adding just about everything “as a Service” on their cloud. They’ve announced Database Backup, Documents, Big Data (Hadoop) and Node.js as a Service, which were new to me, along with all the usual stuff we either already had or expected…

Once everything is available, it will certainly make an impressive lists. From a platform perspective, not quite as diverse as AWS yet, but impressive none the less.

On the whole, Oracle shied away from the normal, “You can do big data with the Oracle database!”, message they’ve been trying to promote over recent years. I think the world and their dog understand that “Big Data” and relational databases don’t really go hand-in-hand.

Instead, Oracle were pushing the Oracle Big Data SQL product. I started off pretty cynical about this, thinking it would just be a knock-off of Cloudera Impala, but it does seem to be something more. Big Data SQL allows you to create external tables over Hadoop and NoSQL data stores, so you can write SQL against them and process the data in your Oracle database. No need to learn any new query/programming tool. It also allows you to join differing data sources together.

Regardless of your views on big data, there are a lot of “data people” out there with SQL skills and, relatively speaking, nobody with map reduce skills. That and the fact that many companies for the foreseeable future will be churning through their map reduce jobs to produce data to put into a relational database for reporting, means that integration between Hadoop, NoSQL and RDBMS will be a key component. Oracle Big Data SQL seems to have hit this nail square on the head. If it weren’t so ridiculously expensive, it would be interesting to see the adoption rate!

This might seem like a minor feature on the surface, but I think it is a massive step forward for Oracle. The reality of the marketplace is that document stores are now seen as the preferred solution for some situations. Oracle will never compete with the likes of MongoDB (it’s webscale) on shear performance, but how many people really need to hit those numbers? Last year my company were considering MongoDB/RavenDB for some HR projects. The main factor against this idea was the split of the “single point of truth” between Oracle and another database technology. If the JSON support in the Oracle database had been available, we would probably have used it.

The JSON support in the database seems pretty comprehensive to me. Once the REST APIs are available, through Oracle REST Data Services (ORDS) it will be interesting to see how the developers react to this.

It was rather disappointing to hear that APEX 5.0 is a long way off going to production. The logic for holding back is sound. It’s got to be bullet proof, especially the upgrade process, so it’s better to wait until it is sorted, than release early and get lost in a support nightmare. Even so, I wanted the pretties… 🙂

I didn’t listen to the formal announcements about WebLogic, so I’m not sure how much of what I heard is still under NDA from ACE Director Briefing. For that reason, I’ll keep my mouth shut, but suffice to say, there are things in the pipeline that will make my life much easier!

I guess some news was that we are 18-24 months away from 12cR2, so you will probably have to upgrade to 12cR1 if you want to retain support without paying any extra cash. The proposed release date for 12cR2 will be after the free 1 year extension to support runs out… When you consider the obligatory, “wait for the first patchset”, that could be a long time without support… (Doc ID 742060.1)

There were of course numerous things about Oracle Linux, Oracle VM, MySQL 5.7, Engineered Systems and a whole bunch of other stuff, but I guess if you follow those areas you already know…

As mentioned in a previous post, the take home message for me is that Oracle are working hard to be a cloud provider. As such, they have spotted obvious flaws in their own products. A big proportion of the new features in their infrastructure products seem to me like a direct result of them “eating their own dog food” while trying to become a cloud provider. I think this is good news for the future of Oracle products, even if you don’t care about the Oracle Cloud specifically.

Big thanks to the ACE Program and OTN for getting me to OOW14. It was great to meet up with my Oracle friends and Oracle family again. I’m looking forward to a jet lag free 10th anniversary OOW next year! 🙂

This site hosting thing really is the gift that keeps giving. 🙂

I wrote a little over a week ago about an outstanding issue with the website, which seemed to be related to people’s company proxy servers, rather than my web server. While I was staying at the Sofitel, I started to get the issue where the HTTP address for my website was giving me the following error.

Forbidden
You don’t have permission to access / on this server.

By the time I was in a position to look at it, I had already moved to the Hilton, which did not exhibit the same problem. After Googling around and discounting the obvious stuff, like missing pages, bad configuration and file/directory permission issues, I came across a reference to some proxy servers (including Squid) producing the same error because they use HTTP 1.0 rather than HTTP 1.1. A suggestion to solve this was to set the following in the “/etc/httpd/conf/httpd.conf” file.

If a HTTP 1.0 request is sent to Apache, this setting will make sure a HTTP 1.0 response is sent back. Any HTTP 1.1 requests are dealt with in the normal fashion. It sounded like it was worth a try, but I had no way to test the impact. That is until Eric Grancher contacted me to say his hotel had the same issue. I added the setting and asked him to check again. Problem solved…

So I think/hope that issue is solved now… 🙂

Another early start on Wednesday. I headed down to meet the Dbvisit gang for breakfast. FYI: I’m not paid to keep mentioning them and I don’t work for them. They are just a great group of people who I really like, so when I get a chance to meet up with them I do. 🙂

From there it was on to Moscone where I bumped into Eric Yen. We’ve known each other for years on the interwebs, so it was nice to spend some face-to-face time. I also bumped into Daniel De Meda again. We chatted for a while the previous day, so when we met today we did a selfie. From there it was off to the demo grounds again, then I met up with Sve Gyurov for lunch. 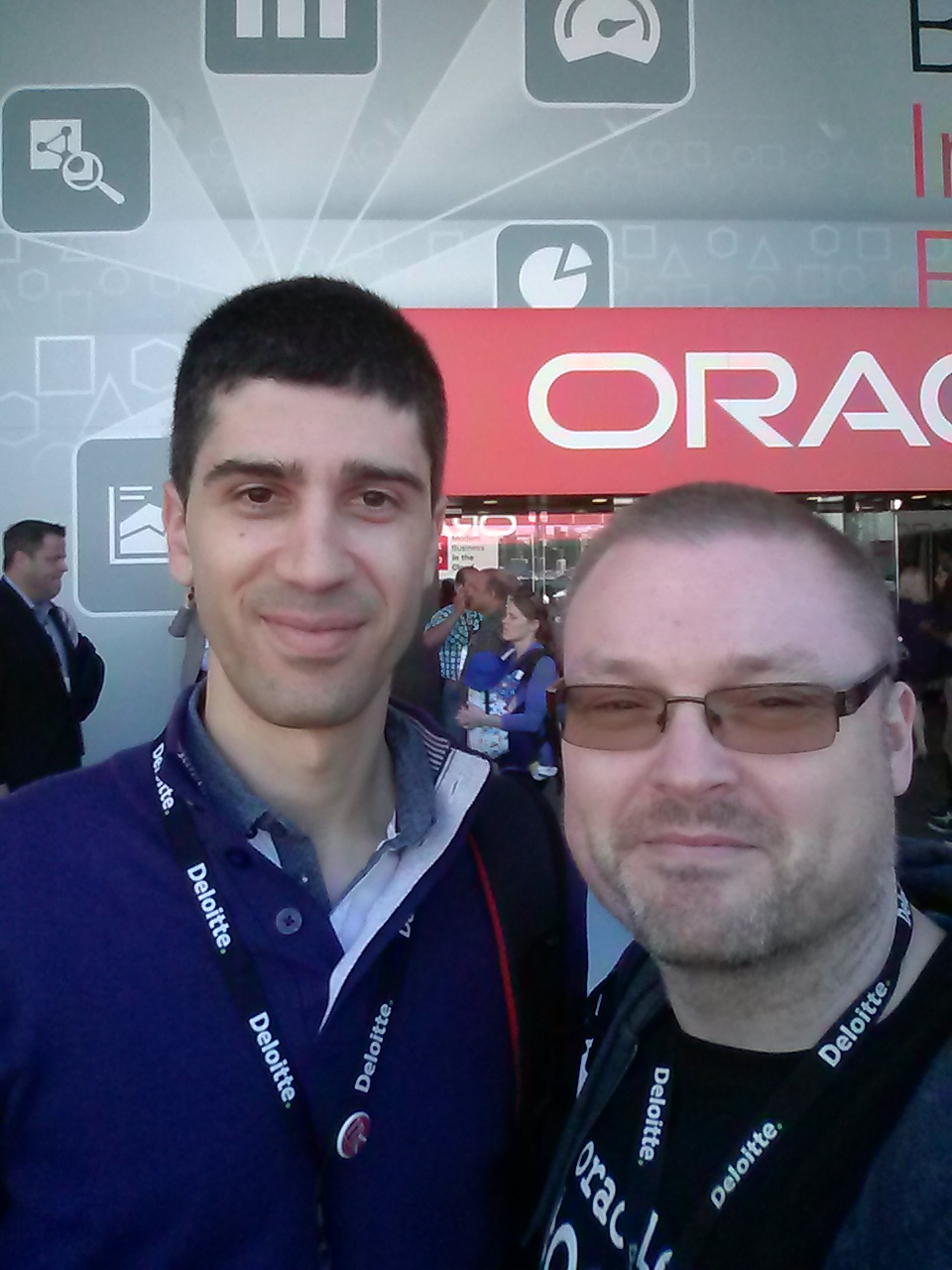 If you’ve ever met Sve, you will realise that I am on tiptoes and he is crouching when we took this shot, otherwise this would be a picture of my head and his chest. 🙂

After lunch I had a major attack of lethargy, so I headed back to the hotel for a rest, which I’ve just surfaced from at 20:00. 🙁 I’m going to duck out of the evening events as well…

So this really marks the end of OpenWorld for me, because I leave tomorrow morning. It’s been a really strange one for me this year. I enjoyed the ACE Director Briefing and felt like I was coping really well, then I kind-of crashed once OOW actually started. What with being ill for the 3 weeks prior to the event, then having to deal with the jet lag, I really had no reserves to fall back on this year. I feel a bit disappointed with myself as it feels like a wasted opportunity, but you can only do so much…

I’ll write a wrap-up post about the whole event when I get back.

Tuesday started early with 5 hours in the hotel lobby. The plan was to catch up on my blogging using the free wifi. I hadn’t blogged for a couple of days, which prompted an email from my mom to see if I was OK. 🙂

It took about 5 hours to complete two blog posts, because every 30 seconds someone new walked by and I was “forced” to speak to them. 🙂

That done, I headed down to Moscone South to check out the Dbvisit stand. I mentioned a few weeks ago that I had never tried a Twinkie, so Chris Lawless went to work correcting that state of affairs by bringing a box of Twinkies to their stand. You can see me trying my first Twinkie here!

I didn’t record me eating my second Twinkie. 🙂

From there is was a visit to the demo grounds again, then up to the OTN lounge to chat with a few people about the ACE Program, life the universe and everything. After a quick lunch with Vikki from the ACE Program, I hooked up with Steven Feuerstein to chat about his YesSQL initiative. Soon after that it was across to the ODTUG gathering briefly, before heading off to the SQL and PL/SQL Performance Panel, which featured Jagan Athreya, Dad (Graham Wood), Tom Kyte and Steven Feuerstein.

After popping back to the hotel to dump my bag, it was back down to Howard Street to the attend the evening festivities. I spent most of the evening with Doug Burns and one of his colleagues called Seamus. I even had a drink. Who’da think it?

Tiredness is still a big problem for me. The day is starting so early that I feel like the living dead most of the day.