Not the best night of sleep last night. During the day I noticed the load time for pages on my website is really slowly in China because it hangs waiting for a Google Javascript file to load, which eventually does a timeout. Once the timeout happens the page continues to render. That means it takes over a minute to load the page. Since I couldn’t sleep I decided to get out of bed and fix it. It turned out the Javascript file just renders the “Powered by Google” text in the search box, so I removed that and the pages now load fast. There are still some asynchronous calls to Google code that timeout, but those don’t block the page rendering, so I don’t care about them. The site is usable now… 🙂

After breakfast I got a taxi to pick Bjoern up from his hotel, before heading off for the airport. It was a quick flight, about 2:35, so it was pretty small compared to what we’ve done so far. I was sitting near some people who were talking really loud. I had my earphones on almost full volume, but the people were still clearly audible. The landing in Tokyo was quite hard, which prompted one of the loud women to wail somewhat, then the woman across the aisle was sick in a bag. I didn’t think the landing was that bad… 🙂

From there we got the Narita Express into town and a short taxi ride to Bjoern’s hotel. He dropped his stuff off, then we got a taxi over to my hotel, where most of the other speakers are staying. We took a walk around the local area to look for food, but I got scared as everything looked like it contained meat or fish, so I got some fries from McDonalds. I will try some proper food tomorrow, when we have someone who speaks Japanese to help make the choices. 🙂

I’m a little worried about my hotel room as the bathroom has been taken over by a Dalek. 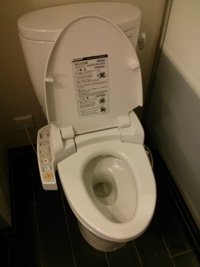