I left the Bangkok event straight after my session, went back to my hotel to get my luggage, then got a taxi to the airport. I was a little worried as people said the traffic would be horrific. Luckily I beat the worst of the traffic and my hotel was very close to the highway. I got to the airport with about 3 hours spare, which sounds like a lot, but for Bangkok airport I think that is a good amount of time.

I got through check-in pretty quickly, but the queues for passport control and security were pretty horrific. There were a couple of large groups of Chinese old people traveling, who seemed to surround me and scream at each for over an hour. I mean properly scream. I felt like I was in the middle of the seagulls in Finding Nemo. I just wanted to shout “Mine! Mine! Mine!” at them. What with that and the constant shoving, I was amazed I didn’t clobber someone. Once through security and passport control, they all scuttled off to the gate for Shanghai, my ears got a much needed rest, and I decided going on a killing spree was probably not necessary… 🙂

The first leg of the journey was a 9:15 hour flight to Sydney. We boarded late, but the journey ended up taking 8:22, so we arrived on time. Apart from being deathly boring, it all went OK. I had an aisle seat and it was an Emirates plane, so that was fine. It did feel a bit like a plague pit. One young boy threw up at the start of the flight and a number of people were coughing and sneezing a lot. The airline staff are really jumpy at the moment, so when I took a pre-emptive Lemsip to stave of a headache, I got the third degree…

On arrival at Sydney, I headed straight for the next flight where I bumped into Pete Sharman and Chris Muir. Pete was on my flight, but Chris was on the next one. Pete and I boarded the plane, then waited while they offloaded the baggage for a missing passenger. By the time we landed, Chris had caught up with us. They managed to lose Pete’s luggage. 🙁 Chris and I took a cab to the hotel, then when out to get some food and chat.

Guess what I have in my apartment? 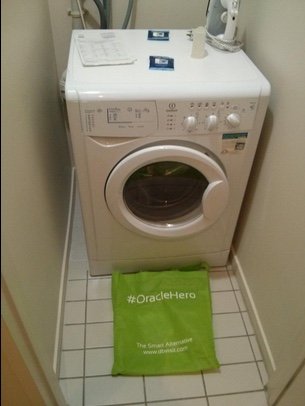 First load done and draped around my room to dry. I’m so happy!