I left my air conditioned room and the heat hit me. It’s winter here in Costa Rica, and I think it was only 23 degrees, but it was so humid it felt like the mid 30s. Breakfast, then a taxi to the venue and the Costa Rica leg of the OTN Tour of Latin America 2016 began.

We were assigned a student as a helper for the day. Mine was Ray, who was a fantastic and had awesome English! 🙂 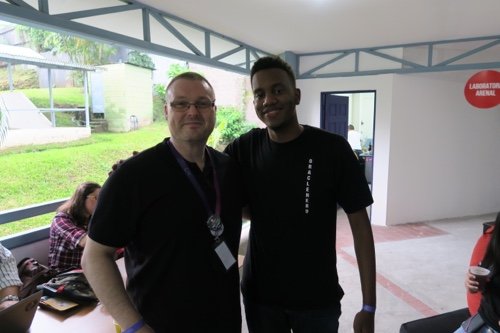 My first session was “It’s raining data! Oracle databases in the cloud.” I had a full room, which was nice, and I got some questions, which is always good. I was happy with the way the session went, so I hope everyone else was too. 🙂

After a short break it was Kamran Agayev with “Oracle 11gR2 RAC Best Practices. ‘What happens if …’ scenarios Oracle 11gR2 RAC”. As the name suggests, Kamran ran through a number of scenarios you might come across on a live system, using videos to demonstrate some of them. I think this method works really well. It’s hard to do live demos of Clusterware and RAC because some operations take a long time to complete. Having a video demo makes life easy as you can speed up bits where necessary, and you don’t have to worry about running lots of VMs on your laptop at once.

Next up was Alex Zaballa with “DBA Commands and Concepts That Every Developer Should Know”. His session started with an explanation of eDB360 and sqld360, which are pretty cool tools. From there he worked through a list of useful features that people may have missed. He included live demos for some of the features. 🙂

After lunch, I had back-to-back sessions to close the day, punctuated by really heavy rain, so it wasn’t just raining data! 🙂

Both sessions went really well. Full rooms again and people seemed happy with them, which is good. 🙂 People were a little shy about asking questions in front of the group, but were much less shy 1:1 after the sessions. I got asked one question about result caching I didn’t know the answer to, so I will investigate that and add it to my article once I know. It’s always good to be asked something you don’t know the answer to. It keeps you on your toes. 🙂

After the wrap-up session, the conference was over. The event went really smoothly, with good control over the schedule timings and the addition of the helpers was a really nice touch.

Once the event was over we went straight to dinner. Driving in Costa Rica during the rush hour is an experience, most of which does not involve moving. 🙂 It took about an hour to move 5km. It would be quicker to walk, but it was raining. As it was, we got a bit of a city tour and were schooled in the use of Waze. Watching the drivers crowd-sourcing information on traffic jams and clear routes is really interesting. We all arrived at the restaurant at about the same time, where we had great food, great conversation, with great people.

All round a fantastic day! Thanks very much ORAUG-CRC for inviting me and making the whole experience so enjoyable.