I purposely didn’t try and get back into the UK time zone because I knew I had an early start for this trip. My alarm was set for 03:00, but I was up from 02:00. Even so, I still managed to be late for the taxi. 🙂

At that time in the morning the roads were clear so the drive to the airport was super fast. The airport was very quiet, which was a bit of a surprise as most of the cheap flights leave at silly times, so often the early starts are very busy. After walking straight through bag drop and security I parked myself at a cafe and opened my laptop.

As you probably know, Oracle 12.2 has been made available on the Oracle Database Cloud Service and like everyone else with an account I created an instance to play with it. This morning my 1 year trial account ended. 🙁 I had tried to get it renewed, but this hadn’t happened in time, so my new 12.2 instance was gone. While I was at the airport I signed up for a new 30 day trial using a corporate email address. It was instantly approved and I created a new DBaaS instance. I’ve got 30 days to learn everything about Oracle 12.2. 🙂

The flight to Frankfurt was short (75 mins), quiet and uneventful, but there was always a nagging doubt in my mind. My stopover in Franfurt was only 65 minutes. Depending on gate locations, getting between gates at Frankfurt can take longer than that. Luckily I was at the front of the plane, so I was able to get off quickly and rush to my next flight.

The flight from Frankfurt to Sofia was only a couple of hours. Once again, pretty uneventful in itself. 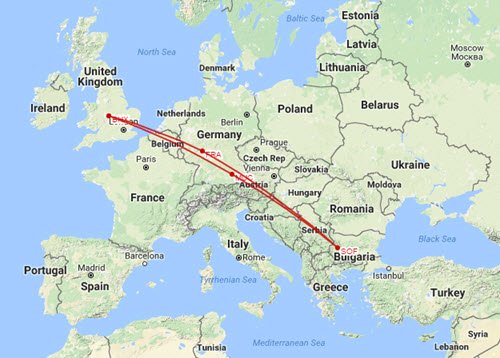 Once I was in the hotel, I went through the usual routine, film the hotel and my room and put everything on charge ready for the next day. 🙂 The hotel is very grand!

I’m on a bit of a fitness kick since my APAC Tour, so I headed off to the gym, but was delayed for some time chatting to the guys, but I did get there in the end.

In the evening we went to the hotel restaurant for food. At about 10:30 I excused myself and crashed for the night.

This morning is the BGOUG Autumn event. Hope to see you there…