We had a day off after the Guatemala event, so Deiby, Ana and Cristina took Debra, Carlos and myself to visit Antigua, Guatemala.

It’s an old city and there are laws to maintain the look and feel of it, so it feels like you’ve stepped back in time. Despite the postcard looks it is a functioning city, so behind the old facades are shops selling modern items. It’s kind-of strange to walk up to a really old building, only to find it is a GNC food supplements store, or a computer store. 🙂

We started with a tour of an old “closed order” convent. It was extremely hot in the morning, so walking around the convent, with its heavy stone walls was really nice. Not only did it look cool, but it actually was cool. 🙂 The guide spoke Spanish, but Cristina and Ana translated for us, so we got to know a lot about the history of the place.

From there the guide took us to a tour of the Jade workshop. One of the store workers explained the history of Jade in Guatemala and showed us several displays of the types of ornaments and jewellery Jade was used to create over the years. It was quite interesting, so I felt a little guilty when I didn’t buy anything from the store at the end. 🙂

After that we went to get some food at a traditional Guatemalan restaurant. As usual, I ate to much. 🙂 I love guacamole and refried beans!

Next we popped into a market, to allow Debra to buy something for her daughter, then the rain came. We drove round the city to take in some more sites, and stopped to have a look in one of the churches.

You’ll notice some very shaky camera work video of the day. The roads on Antigua are cobbled, so the car shakes a lot when you are driving. 🙂

Thanks to Deiby, Ana and Christina for taking us to see “old Guatemala” and for being our personal chauffeurs and translators. 🙂

We are stopping in the conference hotel, which made the morning really simple. Roll out of bed and you are there. 🙂

The first session I went to was Kamran presenting “Oracle 11gR2 RAC Best Practices”. I have already seen this presentation, which was fortunate because I spent most of the session logged on to work to sort some things out. Sorry Kamran!

Next up was me with “Pluggable Databases – What they will break and why you should use them anyway!” Working with live translation can be a little tricky. You start to worry about confusing the translator, which will in turn confuse the audience. Most of the audience weren’t using live translation, so hopefully I didn’t confuse them directly. 🙂 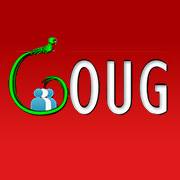 The next session I went to was Alex Zaballa with “The best Oracle database 12c new features for developers and DBAs”. It was a run through some of the goodies in 12c, with live demos for some of them.

After lunch it was me with “It’s raining data! Oracle databases in the cloud.” I think it went OK, once I figured out how to use a mic. 🙂

Then it was on to Debra‘s session on “What does digital disruption mean to the Oracle ecosystem?” I really liked this session. Amongst other things, she compared old business models to new business models, and highlighted the problems for companies that have to deal with both models. Neat.

The final session of my day was “Improving the performance of PL/SQL function calls from SQL”. I think it went pretty well. Once again, I was a little nervous about the live translation with this one because of the demos, but I think it went OK.

From there is was the closing session, then the event was done.

After the event we were taken to a golf driving range, where we all showed spectacular skills… Not! 🙂 It was really good fun. After wowing the golf professional with our talents, we all sat down to eat and before we knew it, the night was over.

Many thanks to Deiby and everyone from GOUG for inviting me! It was good to be back in Guatemala.

I met Debra at the executive lounge to get some breakfast, then it was a quick taxi ride to the Airport in Mexico City. Travelling by car at 08:00 on a Sunday morning is really weird, because the roads are empty. Every other time we’ve been in a car the roads have been packed. As a result, we got to the airport super-early and breezed through bag check and security.

I always complain about the way bag drops are handled, but AeroMexico do it really well. Your bags are weighed before you enter the bag-drop queue, so you don’t have people repacking their cases at the drop-off desk. Perfect!

While we were wondering around, we bumped into Alex, who was on the same flight, so we grabbed a seat by the departure gate.

The flight was pretty straight forward. It was a small plane, so it jiggled about quite a bit, but no real drama. The landing in Guatemala was very odd. We came in with the nose really high, which made it feel like something was going wrong, but we landed fine.

Another thing I liked was the AeroMexico staff were checking you had the correct baggage tag for your bag. I very rarely see this getting checked in airports around the world and it always amazes me more bags aren’t stolen.

There was a hotel minibus waiting to pick us up, and it was only a short drive to the hotel. The minibus had wifi, so I hit a couple of PokeStops and caught 3 Pokemon on the journey. The first I’ve caught in Latin America. 🙂

After check-in, I did a quick tour of the hotel, edited the latest video, then caught up with my mails and blogging.

I intended to sleep for a while, but that didn’t really happen, so I went to the gym and walked on the treadmill, really slowly, watching John Wick on my phone. If you like lots of action, shooting and death, it’s a great film. I know I should have walked round the city, but I didn’t realised I would be going for 90 minutes, or I would have done something more productive. 🙂

While I was waiting for Debra and Alex to come down to the lobby I had a quick chat with Deiby, who was getting everything ready for the conference tomorrow. Once Debra and Alex arrived we went to a Guatemalan place down the road to grab some food. There was melted cheese! 🙂 Then it was back to the hotel early to crash.

Tomorrow is the Guatemala event! See you there!

We arrived in Guatemala at night, went straight to the airport and parked ourselves in the hotel bar for a few minutes before bed. Seeing armed guards in front of the hotel restaurant was more than a little unnerving. On one hand, having the guards should make you feel safer, but on the other hand, the fact they may be necessary is a little scary…

In the morning it was straight off to the conference. Things started off with keynotes by Tom Kyte and Graham Wood, then the room got split into three for the regular presentations. I was speaking in the first time slot and got a good turn out of people. My demos worked and everything went well. Next up was a filmed interview, then I went to the speaker room to try and play catch-up with my online stuff. From this mornings post you will see how well that went. I spent half of my time laughing. 🙂

Later on I went to Graham Wood’s talk on the problems associated with badly managed connection pools. If you get the chance to watch, it is well worth it. The live demonstration clearly shows how badly large numbers of physical connections affect database performance. Think 1-10 database connections per CPU core. Any more and you are probably setting yourself up for a world of hurt.

During my second session there was a technical hitch, causing the projector to cut out intermittantly. Fiddling with the projector ate away at my time, making it a struggle to finish without rushing.

The last session of the day was a keynote by Tom Kyte. I got my 15 seconds of fame when one of his slides was a screen grab of one of my blog posts. Believe it or not, amongst all the book and film reviews he managed to find a post where I was saying something that sounded resonably intelligent. Who’da thunk it?

In the evening we got taken out to dinner by the user group. I ate far too much melted cheese, which left me feeling full and very happy. I also drank two different bottles of local beer. For a non-drinker, this is becoming far too frequent on this tour. When in Guatemala, do as the Guatemalans…

Early the next day we all piled into taxis and headed to the airport. Spending two nights and a total of about 36 hours in Guatemala didn’t leave any time to look around, but the people were really friendly and I had a really great time.

We flew to Honduras on a small plane. One third of the passengers were on the ACE Tour. I did a head count. 🙂

On arrival I threw pretty much all my clothes into the hotel laundry service. I wanted to do it in Guatemala, but we were there for such a short time I got worried they might not get back to me before we had to leave.

Thanks to Carlos and everyone in Guatemala, the country of eternal spring, and to the ACE program for making this happen!

The Guatemala event is over. I will write a proper post about it on the plane tomorrow, but I just wanted to share three photos from the speakers room. 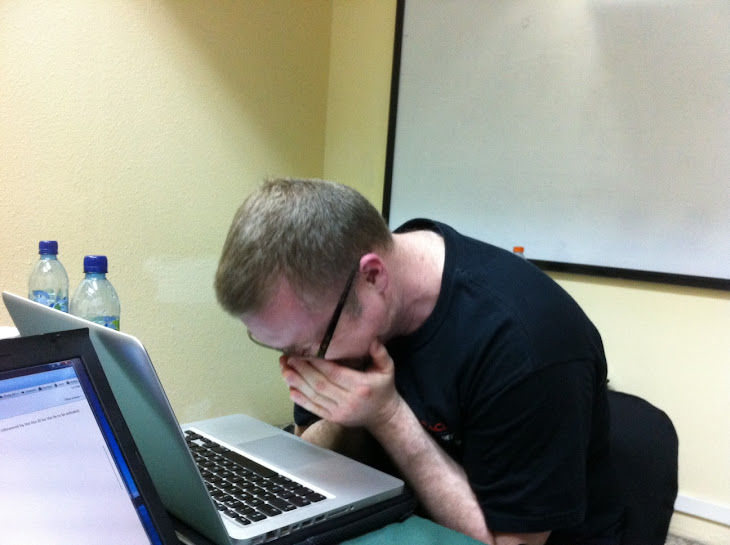 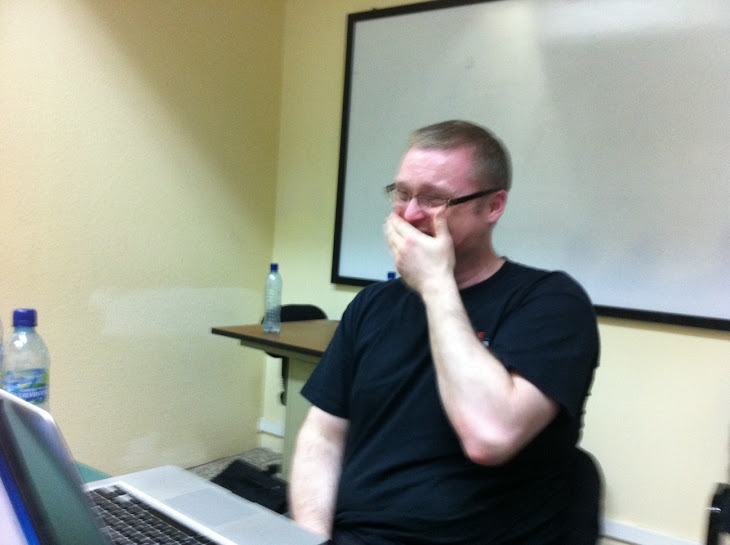 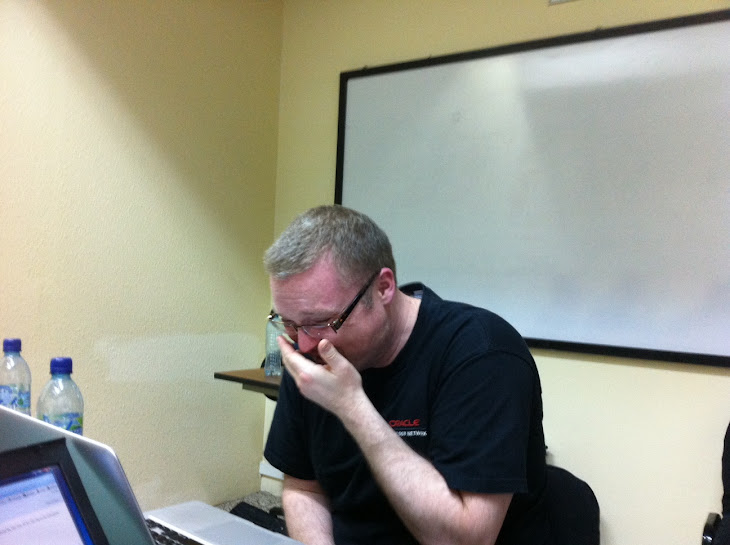 To set the scene, Graham Wood and Debra Lilley are on my left and Tom Kyte is on my right. Debra was describing something that happened earlier in the week and I just completely lost it. I was laughing so hard, tears were streaming down my face. These tours are tiring and really hard work, but they are also extremely good fun!