The traffic on the way to Oracle Midlands Event #9 was a complete nightmare! There are a bunch of roadworks around the city that are making the traffic movement really problematic at the moment. Added to that, the always slow M6 was causing tailbacks along the Aston Express Way into the city. The traffic islands were all blocked, with people blocking exits and jumping red lights in a desperate attempt to get on them. Fortunately I started in plenty of time so I arrived with a few minutes to spare. Phew!

First up was Joel Goodman speaking about “Oracle Distributed Transactions”. This was actually quite a scary talk because it showed me both how much I don’t know and how much I’ve forgotten over the years. I’m getting old! There were a few raised eyebrows when he discussed the automatic and manual recovery of in-doubt transactions. I think a few people will be reviewing their recovery procedures. 🙂 Joel is always good value as a presenter and as a walking Oracle encyclopedia!

The break, which included samosas and a prize draw, gave me the opportunity to chat to a few people, including @Kelloggs_ville. We had spoken at the start of the event, but in true Tim Hall style, I hadn’t made the connection between the real person and the Twitter picture. 🙂 Don Stieler knows my skills in this respect. 🙂

Next up was Richard Harrison, a regular Oracle Midlands attendee and a previous “Lightning Talk” speaker. His session was on “Data Pump Tips & Tricks”. This talk really highlights to me the value of watching sessions on stuff you already know. Everyone has a different experience of the Oracle product set. Everyone has had to try and solve different problems using it. As a result, everyone is capable of putting a unique spin on the subject. I came away with a bunch of stuff I hadn’t considered before, which I will probably go back and retro-fit into some of my articles. Judging by the number of people scribbling away, I think other people were of a similar mind. 🙂 Richard’s session was predominantly demo-based, a man after my own heart. 🙂 I think this was Richard’s first full-length presentation and I’m hoping this will be the first of many!

I’m really getting a kick out of seeing how Oracle Midlands develops. Mike has done a truly amazing job of lining up great speakers and I feel like the group of attendees are bonding more with each event. I came away from the event feeling really hyper and enthusiastic about Oracle. It’s good to be reminded how much more there is to learn and to feel connected to other Oracle geeks. 🙂

Mike’s already got the speakers for the next couple of events lined up. The next one is by some new kid on the block called Jonathan Lewis. 🙂 The one after is by Christian Antognini. Amazing!

Big thanks to Mike for keeping this train rolling. Thanks to everyone who keeps turning up and showing their support. This stuff can only happen if you keep coming! Thanks to the speakers for taking the time out to come and educate us. Big thanks also to Red Stack Technology (my new favourite company 🙂 ) for sponsoring the event, so it can remain free! I’ll be seeing some of you folks at the UKOUG Systems Event later today! 🙂

Oracle Midlands Event #9 is now confirmed with another great lineup! 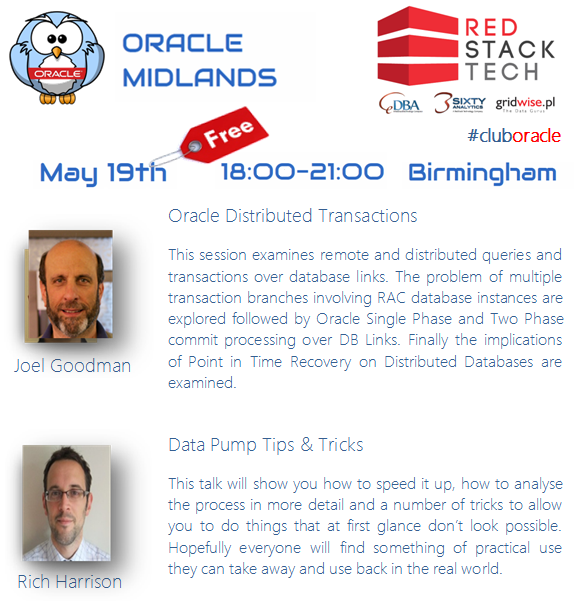 Thanks to Red Stack Technology for sponsoring the event, allowing it to remain free!

Put the date in your diary. See you there!