I got up late, so I missed the morning gym session.

When I got to Moscone at about 08:30, I headed straight for the speakers room to play catch-up on emails, questions, blog posts and work emails. I expected that to take a few minutes, but it actually took me up to midday. It’s crazy how much time we spend on this community stuff. 🙂

I spent most of the afternoon in the OTN Lounge geeking out with a variety of people. I was initially expecting to spend the whole day in presentations, but it turned out I didn’t manage to get to a single one. I spent some time chatting with the ladies and gents from the RAC SIG about ideas for future directions for user groups and collaborative efforts like RAC Attack. It’s interesting to hear the different opinions and motivations of the people involved.

I had an interesting chat with Lenz Grimmer about a number of Linux related things. He was kind enough to help me out a few months ago with some clarifications on my Oracle Linux : Frequently Asked Questions post and was asking how I was getting on with the Oracle Linux migrations at my current company, which spawned a few ideas for some followup posts about the process we’ve gone through to move a variety of systems from RHEL, Solaris and HP-UX to Oracle Linux on VMware. Watch this space! 🙂

From the OTN Lounge the next stop was the “It’s a Wrap” party, where I had an emotional reunion with my dad. 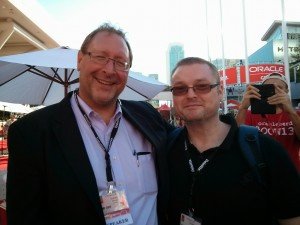 I’m still waiting for the 44 years worth of birthday and Christmas presents he owes me!

I’m back at the hotel now, feeling totally burnt out. I know it’s not very rock-n-roll, but I think I’m going to bed. 🙂 I’m flying back home tomorrow, so I’ll get back on Saturday UK time. Next week I’m back to work during the day and back to learning 12c during the evenings. Thank goodness for insomnia…

A familiar morning. Up at silly o’clock, went to the gym, then read in my room for a while…

The plan for Wednesday was pretty much the same as Tuesday. Most of the day was spent at RAC Attack. I thought we were meant to be helping people install RAC on their laptops, but I quickly came to understand this was a cover for watching Yuri take photos of people jumping in the air… 🙂

A big thank you to all the people involved in making RAC Attack happen again! A lot of people helped in making the new 12c install notes. Lots of people dedicated two days of OOW2013 to this, rather than watching presentations or swanning off to the boat racing. Thanks also to the OTN crowd for giving up so much space to us.

After RAC Attack I popped in to see John Beresniewwicz and Kellyn Pot’Vin presenting, “Active Session History Deep Dive: Advanced Performance Analysis Tips”. I like listening to both these speakers!

From there it was back to the exhibition stands to hook up with the DBVisit guys, before returning to the OTN Lounge for the “Meet the ADF Team” session. David Peake was lurking there, pretending to be part of the ADF team. There’s a rumour there that is just begging to be started! 🙂

Then it was back to the hotel to dump my stuff before heading off to the Bloggers Meetup. I was only there for about 2 minutes, before I had to leave for the appreciation event, so sorry if I missed anyone. Having spent so much time in the OTN Lounge this year, I doubt there is anyone I’ve not met already. 🙂

This year I got to do the appreciation event in style as a VIP, thanks to an invite by the DBVisit guys. We were in the New Zealand suite at the top of the stadium, so I was an honorary Kiwi for the night. 🙂 I had a few drinks and ate vast quantities of food, without having to fight it out with the crowds. It was great! I’m always bigging up the DBVisit folks, but they really are a great group of people. Chris Lawless (formerly of the Oracle GoldenGate team) is a great addition to the team. He cracked me up all night. To show my support, I put some “temporary” Dbman tattoos on my arms. Turns out they are not so temporary after all. Two showers and some scrubbing and they are still with me. 🙂 You can see a picture of them here. I love that picture because it makes me look skinny! 🙂

During the event, I managed to find Nemo and watch Maroon 5 and The Black Keys. Adam Lavine from Maroon 5 has a really strange voice. When he sings it sounds fine, but when he talks he sounds like he’s been hitting the helium balloons. It’s like Alvin and the Chipmunks. Very odd. I’m not a fan of Maroon 5, so I was surprised that I recognised all but one of the songs they played. They were really good. The Black Keys where a lot heavier than I expected. I knew I had heard some of their stuff, but I wasn’t sure how much I would recognise. I think there were three songs I definitely recognised. Pretty cool.

I got back to the hotel at about 01:00, so this morning was a later start for me. Someone has been shopping again. Lots of boxes outside their room again this morning! 🙂

Another “groundhog day” morning. Up at silly o’clock, went to the gym, then read in my room for a while…

Tuesday was the first day of RAC Attack proper. We had 3 tables at the OTN lounge, all of which were full. There were a few teething problems with the new set of instructions, but we muddled through. In some ways, this is more fun than if things go too smoothly. 🙂 RAC Attack took pretty much the whole day. I hoped to go and see my adopted dad (Graham Wood) in the Real World Performance Group session, but that never happened.

I left RAC Attack and headed down to the demo grounds to have a bit of a moan at the Cloud Control guys. To my delight the stand was being manned by Pete Sharman. I’ve “known of” Pete for many years, but our paths have never crossed before today. It was a pleasure to meet him at last, but that didn’t stop me from having a moan about some bits of Cloud Control. 🙂

As I was leaving the Cloud Control stand I bumped into Jacco Landlust. When he’s not offending Cary Millsap and Tom Kyte, Jacco skates the fine line between being a DBA and WebLogic administrator. Being a WebLogic newbie, I always like hooking up with Jacco to pick his brains and validate that I’ve not screwed things up too badly. After pumping him for information, I now feel like I’ve graduated to post-newbie status. 🙂 Of course the big news is he’s the latest Oracle ACE to become an Oracle employee. It’s starting to feel like a recruitment program. 🙂

Next I headed up to the OTN Meetup, like I hadn’t spent enough time in the OTN Lounge already. 🙂 I spent some time talking to Connor McDonald, Chris Muir, Lonneke Dikmans, Marcelle Kratochvil, Doug Gault, Scott Spendolini and Liron Amitzi, to name but a few. I’d like to say I was intelligent and insightful, but I had drunk 3 beers and felt extremely merry, so I’m guessing I was talking complete nonsense, nothing new there. 🙂

As the OTN meetup drew to a close I walked back to the hotel with Liron Amitzi. He’s in the room opposite to me and I keep ribbing him about permanently having the “Do not disturb” sign on the door. We were discussing some of the installation oddities we’ve seen, as well as the Larry Ellison key note, that Larry didn’t turn up to…

I had a quick chat to John Scott and Roel Hartman in the lobby of the hotel as they left for the APEX Meetup.

So that’s another day done. Tomorrow is the second day of RAC Attack.

Monday started in a similar way to Sunday. I woke up at silly o’clock, went to the gym, then read in my room for a while.

Monday morning was spent flitting between the demo grounds and the OTN Lounge. I also filmed a short interview for OTN, which will probably appear at some point. It was a one-take thing, so it will annoy the hell out of me when I watch it back 75,000 times. 🙂

Later in the day I went to the Real World Performance Group session, then it was back to the OTN lounge to for some more networking/chatting. 🙂

On the way back to the hotel I popped into a bar to meet the AppsLab guys and David Haimes, who filmed my abortive attempt at using Anthony’s Google Glass here. It’s tricky when you have glasses. You either have to balance them outside your glasses, or not wear your glasses, so everything is blurred. It helps if you are not in a noisy bar when you are trying them. 🙂

I got back to the hotel and found my credit cards had been blocked. I tried and failed to get them unblocked, which led to a few very angry tweets!

Being tired and rather angry, I just went to bed rather than going to the “Friends of Pythian” event.

I arrived in San Francisco on midday Saturday. I basically lost a nights sleep, all but 1 hour, so I was not feeling on top of the world. I got some food and went to bed for the rest of the day. I started Sunday at 00:30, so Sunday was going to be a looooonnnnggggg day. 🙂

After getting breakfast at 03:00, hitting the gym and reading for a while, I ventured down to the conference.

The first session I went to was “Carry Millsap – Thinking Clearly About Performance”. I’ve seen variations on this session a number of times and I’ve been on a one day course with Cary, but it’s still nice to hear this stuff again. Every time you pick up something new. I already have a copy of Mastering Trace Data from when I did his course, but I ordered the revised version from Amazon.

Next up was “Kyle Hailey – Oracle Instant Database Cloning”. The Delphix virtual database stuff looks amazing! I thought I was down with the whole database cloning thing (duplicate, clonedb, clone PDB), but this stuff is another level. Wow!

After Kyle’s session I was part of an IOUG panel session called “What I wish I knew before I became a DBA”. I found it fun. I hope the audience did too. I ended up speaking to some people for about an hour after the session ended.

From there it was off to the OTN Lounge to do the “RAC Attack” introduction. I had to explain a little about the history of RAC Attack. I’m sure you will see a number of embaressing Ninja photos coming out. I am the fat ninja. 🙂

Then it was off to the Oracle ACE dinner at the Walt Disney Museum. It’s great to hook up with people I’ve not seen in a while. Put me in a room with geeks and I’m in my element!