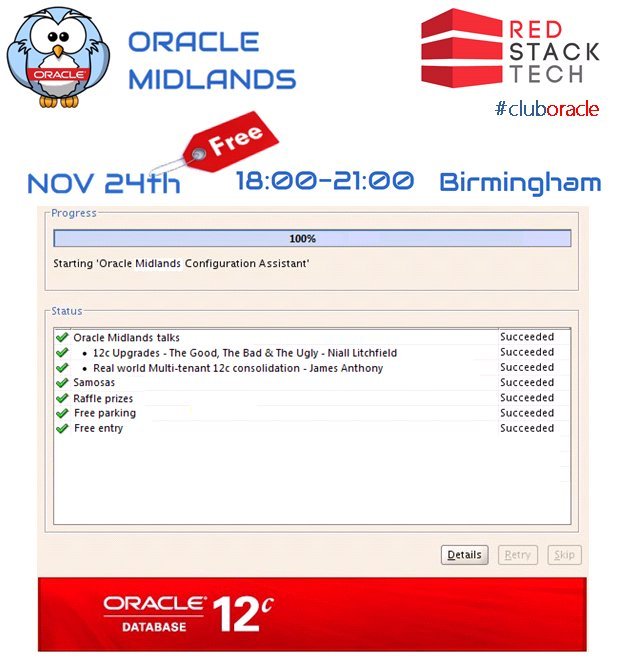 If you live near, please show your support for the event and come along. It’s free thanks to the sponsorship by RedStackTech.

Having spent the last two weeks at Oracle OpenWorld 2016, what’s the obvious thing to do within a couple of days of getting back? Go to Oracle Midlands to hear more about Oracle 12c Release 2 of course!

First up was Dominic Giles with “Oracle Database 12c Release 2: Whats new?… What’s improved?” I’ve been a big fan of SwingBench forever so the name Dominic Giles has been familiar to me for a long time. Up until recently I had never actually put a face to that name, but once I did I realised I’d seen him loads of times over the years. I was finally able to introduce myself properly at this years ACE Director Briefing and apologise for not doing so earlier. 🙂

Dominic’s session was a romp through some of the 12cR2 new features and enhancements. With allegedly 500+ new features in 12cR2, not all of which are documented yet, there was a bunch of stuff I hadn’t already heard of. Dominic is relaxed and super-confident in his presenting style. That combined with the huge list of new stuff knocked my internal 12cR2 hype-meter up a few notches. There is so much new stuff it is really daunting, but exciting too.

Note to self. Keep checking the v$version view on LiveSQL incase it mysteriously switches to 12cR2 at some point soon…

Next up was Nigel Bayliss, the latest incarnation of “The Optimzer Lady”, with “The Optimizer in Oracle Database 12c Release 2: What You Need To Know”. I had the good fortune of being on a SQL performance panel with Nigel at this years Oracle OpenWorld, so this is the second time we’ve bumped into each other in a week, but on different sides of the planet. 🙂

As the name suggests, Nigel’s session was also about new features, but focussed on the optimizer. With finer grained control over the adaptive features and more conservative defaults in this regard, I think a move from 11gR2 to 12cR2 will be less of a mystery than the switch from 11gR2 to 12cR1 was for many people. 🙂 The session actually covered most of the 12cR1 optimizer features as part of the setup for what’s changed in 12cR2, which I thought worked really well. Nigel is also a confident speaker, with a laid back approach and midlands accent, which of course makes him a superior presenter! 🙂 Once again, my internal 12cR2 hype-meter got knocked up a few more notches!

Big thanks to Dominic and Nigel for coming to speak to us. Thanks as always to Red Stack Tech for sponsoring the event, allowing it to remain free, and to Mike for organising it! 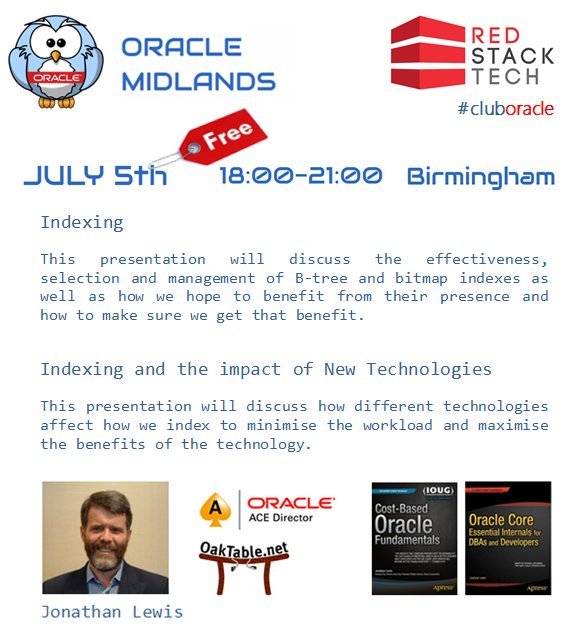 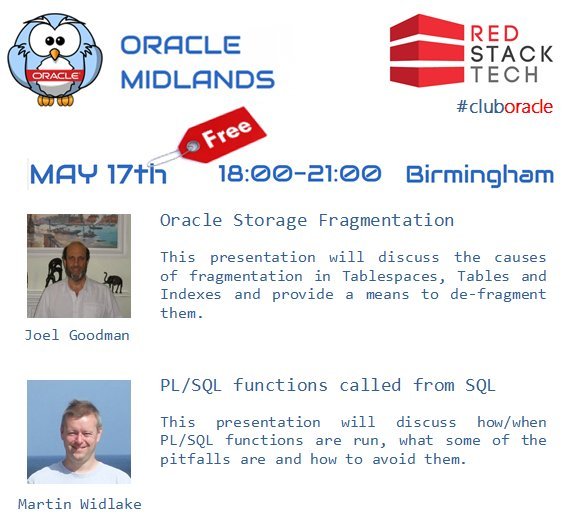 Last night was Oracle Midlands Even #14 with Lothar Flatz.

The session started with “Raiders of the Data Dictionary I: Indexing for the Workload” where Lothar discussed a project he worked on based around completely revamping the indexing of a system. I guess the best way I can describe it is to say it’s a more scientific approach to indexing, using the contents of the dictionary to provide information about columns and column groups used in queries to determine the indexes to create. In some ways the approach was quite extreme (throw everything away and start again), but I also admire the bravery of that approach!

Next up was “Raiders of the Data Dictionary II: The Curse of the Buffer Cache” where Lothar discussed the problems associated with trying to keep large, frequently used tables in the buffer cache. Once again, some interesting points made and some things that will definitely influence my approach in future.

It was great to meet Lothar in person for the first time. After being in the game for 20+ years many subjects can start to feel a little repetitive, so it’s nice when someone comes along with a different spin on a subject. I certainly found myself asking a lot of questions of him and myself, which surely must be what this knowledge spreading thing is all about!

Thanks to Lothar for taking the time to come and speak to us and to everyone that came along to listen. Thanks to Mike for doing a great job in keeping Oracle Midlands going and to Red Stack Tech for their continued support. 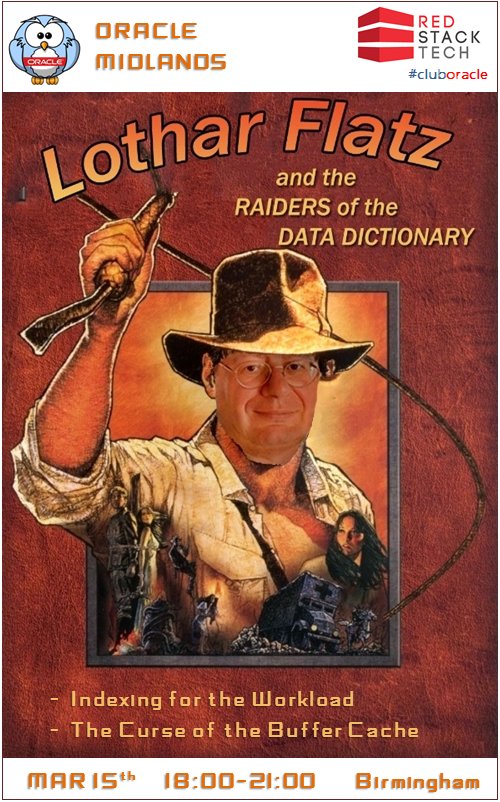