The day started with a taxi ride into New Street station to get the 06:01 train to Liverpool Lime Street. I was a little dissapointed that the train was a sprint train, so there were no tables and no power sockets. When the ticket guy came through I asked about an upgrade to first class and it was only £25 for the return journey, so I paid the extra to get a table and a power socket. Two 90 minute journeys are so much more bearable when you can actually do something useful on them. From Lime Street, it was a quick taxi ride to the ACC where I picked up my pass and headed straight to the room for my first session.

After chatting to Peter Scott and Richard Foote about Richard’s fake tan and botox, I went to the speaker lounge and spent some time chatting to a variety of people. I also got my Christmas present from my dad. I was kind-of surprised and the size of the cheque, but I promised not to tell the wife or daughter how much he gave me! They are jealous types.

Next up was Robyn Sands speaking about “Why Solid SQL Still Delivers the Best ROI”. Being a database guy I guess it’s pretty obvious I’m going to agree entirely with what Robyn says. 🙂 A few of the key points included:

There are always exceptions to the rules, but bad programming gives bad performance. The test harness used for the demos is really neat. It really does hammer home the point in a very clear way! 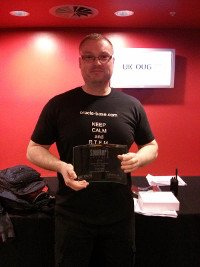 I chatted through lunch and didn’t actually make it to the food. 🙂 After lunch it was off to the keynotes, where the UKOUG gave out some awards. I picked up a “UK Speaker Award” for last years session on “Improving the Performance of PL/SQL Function Calls from SQL”. The award was based on the speaker evaluations, which makes it feel kind-of special. I wasn’t too happy with my performance during that particular session last year, but obviously some of the folks in the audience felt different. Just goes to show you can’t be objective about your own performance. I’ll no doubt act all blasé about it, like it does’t matter, but I’ll secretly get a t-shirt printed to wear around the house. 🙂 Thanks to everyone who filled in the evaluations. It is very nice to get a pat on the back like this from time to time…

The keynote overran and I was sitting near the front, so I was a bit nervous about leaving early. As a result, I was the last person to arrive at my session. My second session was an introduction to Analytic Functions, which seemed popular. The room was full and Tom claimed he was turned away. I think he was on the wind-up! It’s always better to have a smaller room that’s full, that a large room that feels empty. 🙂 I was a bit “giddy” during this session. I think it was a combination of things including lack of food, adrenalin, excitement over the award, having a few friends in the audience and it being my last presentation of the year. I remember it feeling like a fun session for me. Not totally sure how that translates to the audience reaction though. As an example of my “giddiness”, about 3/4 of the way through the session I noticed Dawn on the front row, right in front of me, stopped and said something like, “Oh. You’re here!”. I must have looked like I was on crack! 🙂

During the Analytics session I try to break things down to the simplest possible terms, so this is more like a teaching session than a conference presentation. Analytics is something you just have to get your hands dirty with. No amount conference presentations will actually make you feel comfortable with them, so rather than trying to get heavy, I’m trying to get people over the first hurdle and get them started. The response from this session is usually pretty good, but I’m always worried someone will miss the word “introduction” mentioned in the abstract and turn up expecting some deep dive type session. It’s always good when you learn stuff during sessions you present and I learnt a couple of things thanks to Stew Ashton. Happy days!

After another chatting session in the speaker lounge, it was off to see dad speak about “AWR: Looking Beyond the Wait Events and Top SQL”. This meant missing Tom’s “AskTom” session, but family comes first! 🙂 I really liked this session. The main point dad was making was people often jump into the top-5 wait events and try to fix the problem, without doing the necessary prep work first. Guilty! Instead, people should look at the information in the AWR report and try to build a picture of the system and application architecture, before trying to fix the problem. In many cases, this process will actually highlight the problems. This is not an exhaustive list, but the sort of things he highlighted were:

Only after you’ve built up this picture, should you jump to the top 5 waits and the top SQL sections. Do they confirm your picture of the system built up from the previous investigation?

I’m pretty sure I will end up at the same conclusions when looking at an AWR report, but I think this approach is much better than the way I do things, so I will try to adapt and see how it goes. If you didn’t manage to see the session, you should download the slides and check them out. I think there is a lot of value there. Well done dad!

After the last session we headed off to the exhibition hall to socialise for a bit. I talked to a whole bunch of people, which is the best bit about conferences. I also got my first food of the day, a chocolate fish from the Dbvisit stand. 🙂 I spent quite a bit of time talking to Jacco Landlust, who is always a great source of info. His advice has been incredibly valuable in plugging up the gaping holes in my middle tier knowledge.

At about 19:40 I shot off to the station and got on the 20:04 train home. A table and a power socket again. Awesome. I also managed to scrounge and extra strong mint of someone, which was the second meal of the day. 🙂 I got to Birmingham at about 21:45 and stuffed some food down my face before getting a taxi home.

So that’s the last conference of the year. Let’s see what 2015 brings…

Thanks to my company for paying for the train ticket and letting me have the day off work as a “training day”, rather than holiday, especially having just got back from a three week “holiday” doing the OTN APAC tour. 🙂 Thanks to the UKOUG for inviting me again and making sure everything ran smoothly. Thanks to all the attendees this year and to everyone who filled in their evaluations from last year. Cheques are in the mail. 🙂 I’ll do a separate post about the ACE Program…

I’ve literally just picked up my train tickets for Monday’s trip to Liverpool for UKOUG Tech14!

I’m only going to be there for Monday, so I’ve got a lot to pack in. I’ll be doing 2 sessions, at 09:00 and 14:30, so if you don’t want to come to my sessions, but want to meet up to chat, grab me before or after them. Geeking out is much more important than the sessions. 🙂

I thought I might be able to make the Sunday stuff this year, which I usually have to miss because of my nephew’s birthday party (got to get your priorities right). I thought I might make it this year because his birthday is on Wednesday (today), but they decided to do the party on the weekend following, rather than the weekend preceding, so no luck. One of these years the stars will align and I’ll get to do the whole event!

Anyway, I’m looking forward to meeting up with everyone again. Hopefully I will get to see the wife and kid. Not sure if dad (and master of social media) is going to make it this year…

UKOUG have extended the deadline for the Tech14 paper submission until Tuesday 27th May, giving people an extra weekend to get their abstracts in.

This is your last chance to get involved.