A couple of weeks ago I posted about doing a fresh installation of Enterprise Manager Cloud Control 13c (article, blog post). I’ve finally got around to doing an upgrade test from EM CC 12cR5 to 13cR1. You can see the result of that here. 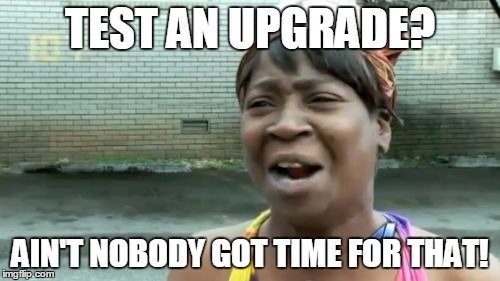 Gokhan Atil did a post about this upgrade pretty much as soon as it was released, so I’m a little late to the party compared to him. 🙂

As you’ll see from the article, the upgrade process was similar to the patches that came before it. There are of course some extra prerequisites which you can read about in either my post, Gokhan’s or the docs…

Even though the upgrade tests were fine, after discussion with our system administrators, we are probably going to go for a clean installation and migrate the monitored hosts one at a time.

Why the slash and burn approach? I’ve made some mistakes with our installations in the past and they persist with every subsequent upgrade. It would be nice to take a step back and fix stuff. We are doing a similar thing with our WebLogic installations. I was learning new stuff all the time while I was installing our WebLogic 11g infrastructure. Rather than upgrading to WebLogic 12cR2, we are going to build a new infrastructure, migrate to it and throw the old one away.

This is relatively easy for us for a few reasons.

If we had been going for the upgrade approach, I probably would have done it in the next couple of weeks. With clean slate approach, we’ll probably take a few more weeks to get ready for it. No point rushing in and making more mistakes. I would rather let the idea brew for a while before we start. 🙂