Followers of the blog will know I’ve been a long time user of the editor UltraEdit. 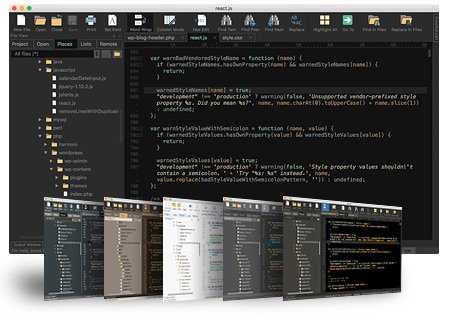 I got introduced to UltraEdit about 15 years ago. At the time everything else around sucked. I paid my money and was hooked pretty much instantly. At that point it was a Windows-only product. When I later ditched Windows in favour of Linux at home, I went through a succession of crappy editors and was never really happy. I eventually started running UltraEdit on Linux using Wine and it “mostly” worked.

A few years ago I switched from Linux desktops to Mac and went through another succession of crappy editors that everyone told me were amazing. One day I woke up to find UltraEdit had released a Mac and Linux version of their editor. It was lacking features compared to the Windows version, but it worked. I immediately switched and have been there ever since.

I have a multi-platform unlimited upgrades license, which cost me something like $200 a few years ago. I use UltraEdit for Mac on my desktop at home. I use the Windows version when I’m at work. Very occasionally I fire up the Linux version on one of my servers, but that tends not to happen much these days as I just connect to that stuff from my Mac.

Today I’ve upgraded to UltraEdit for Mac v16. It still doesn’t have 100% of the features of the Windows version, but it’s getting close. Happy days!

I know there are a lot of good editors out there (Sublime Text, NotePad++, Atom etc.), but I don’t get on too well with any of them. I’m sure a lot of if comes down to familiarity, but I find myself saying, “If only they could do …” all the time. Aaaahhhh, to be old and set in your ways. 🙂 Anyway, if you like any of those, all power to you. If you are struggling against them, you might want to give UltraEdit a try!