Day 2 of AMIS 25 – Beyond the Horizon started with me playing catch-up on some blogging, then the conference proper started.

The first session I went to was Jeremy Ashley presenting “General Session – Oracle Applications User Experience: Trends and Strategy”. I wrote loads of notes on this, because I find it really interesting. I’m not going to post them here because I will make some mistakes and look like a fool. I’ve seen a number of sessions by the UX team over the years and each time I do, it seems to click a little more. I’m starting to think SQL*Plus may not be the ultimate in UI or UX, but I’m not 100% sure…

Next up was Björn Rost doing a “Quick Guide to Open Source SQL Tuning Tools (Quickie)”. This was a short session talking about some tools I know and use (rlWrap, SQLcl, MOATS, Snapper, SQL Developer) and something that was new to me TUNAs360.

After that was my session about running Oracle databases in the cloud.

I then took a break do some work, upgrading Tomcat and deploying a new application, before heading off to the OTN Cloud Developer Challenge results.

I would like to say we were robbed, but we really weren’t. 🙂 Second place went to the AMIS team who did a conference organisation application. First place went to the “Team No Borders” with an application to help control air pollution in Mexico City. I think that was a popular choice amongst a number of people I spoke to before the awards. Well done guys!

Before I knew it, the conference was over! Thanks to everyone at AMIS for putting together a great event. It went so smoothly, it’s hard to believe it was the first one. Thanks also to OTN and the Oracle ACE Program for organising the Cloud Developer Challenge. It was good fun! Thanks to all the attendees and speakers. I hope to see you again soon!

We had already been at the venue the day before for the beginning of the OTN Cloud Developer Challenge, but today was the first day of AMIS 25 – Beyond the Horizon. The day started at about 07:00, with a short minibus trip to the venue.

The first session I attended was “Get your money’s worth out of your Database” by Patrick Barel. He presented a whole bunch of database features that developers need to be using to make the most of their Oracle databases, including a bunch of 12c features. I like these kind of sessions. Much of what we end up doing at conferences is giving people pointers to what we think is interesting.

Next I went to “Smart Offices Are the Future of Work, Powered by the Internet of Things” by Noel Portugal. This started with some talk about designing for mobility, because people are connected all the time. It then moved on to the internet of things, where he discussed how small, cheap electronics can bridge the gap between the physical world and the internet, using examples like Amazon Dash, gesture controls, voice controls like Amazon Echo etc. The UX team are regularly using a lot of this stuff for their own office, kind-of making it the office of the present, not the future.

At this point, our team got together to carry on working on the OTN Cloud Developer Challenge, which took a big chunk of the day…

Later I headed off to see Jonathan Lewis present a session called “Just Don’t Do It”. As the name suggests, this session was focussed on improving performance by avoiding unnecessary work. The session was made up of examples from the OTN forums and consulting jobs where SQL was doing loads of unnecessary work. Often reframing the question allowed the statement to be rewritten to reduce the amount of work necessary to achieve the same goal. Neat!

From there it was back to the OTN Cloud Developer Challenge. All the groups got together to do the pitch for their solutions. With such a short timescale and the complexity of some of the services, most groups had hit some roadblocks, but everyone produced something. Debra actually did the pitch for two groups, but she did an exceptional job for ours. As I mentioned in a previous post, our team didn’t actually include people who do development outside of the database, and the challenge focussed on the non-DB side of things, which left us in a rather awkward position. By substituting comedy for content, Debra managed to make our pitch sound a lot better than it was. She also demoed our mobile app on her phone, and conveniently forgot to mention it was written in APEX. Your can see the home page below. 🙂 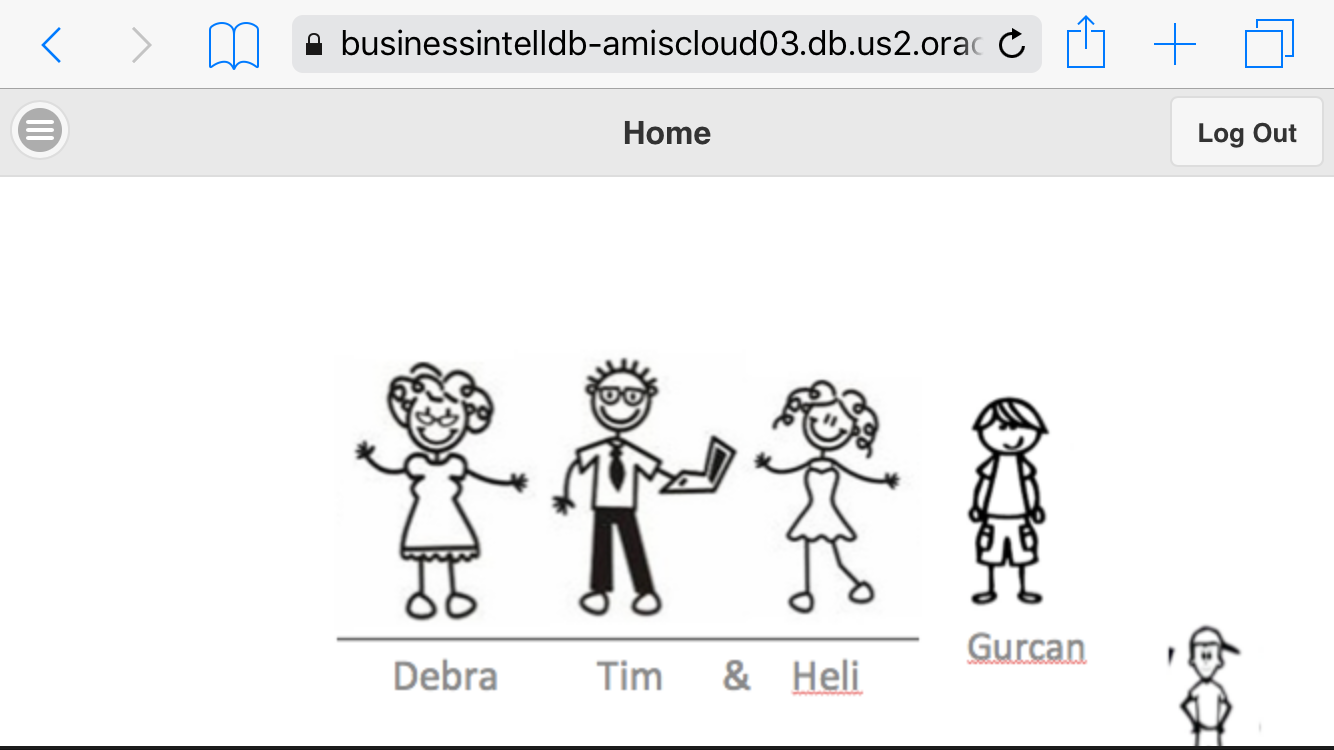 From there is was on to the evening event. Lots of food. Lots of drinks for those that do. There was also a covers band called The Originals who took request for literally anything. Pretty impressive. A few of us old folks ducked out a little early and headed back to the hotel and our beds.