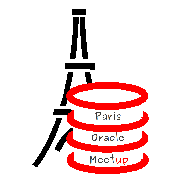 The reason for me being in Paris was to speak at the Paris Province Oracle Meetup. Breaking my journey to the Netherlands with a quick trip to Paris was a really easy way to connect with more people.

The Paris meetup is very similar to those found in other cities around the world, including Oracle Midlands in my home town. We all gathered at about 19:00 in the AVNET office in Paris and I did two talks with a short break between them. The first talk was about pluggable databases and the second one was about running Oracle databases in the cloud.

I like these local meetups. They feel a lot less formal and more personal than some (but not all) conferences. It just feels more natural to me. I really enjoyed doing the talks and the crowd seemed to respond well to them, which was nice. I’ll definitely be back again, if they will have me. Maybe next time I will get to do some sightseeing in Paris too. 🙂

The meetup finished at about 21:45 and Stew Aston took me out to get some food. We chatted for ages about life, the Universe and Oracle. 🙂 Once the food was over, he gave me a lift back to my hotel and by the time I got into bed it was about 01:00.

Big thanks for Yves for inviting me across to the event, and thank you to everyone who came out to support the event. Without you it can’t happen. Also thanks go out to the Oracle ACE Program for continuing to let me fly the flag. 🙂

So that’s paris done in less than 24 hours. Next stop the Netherlands!