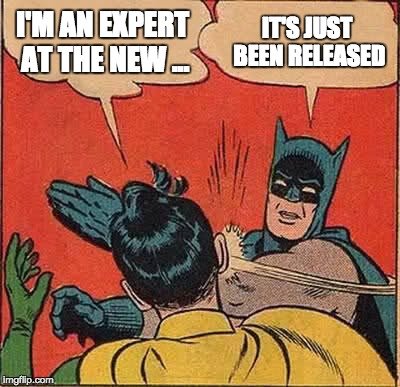 Every time a new database version is released a group of people, myself included, start pushing out content about it. I can guarantee you one thing about all these people. None of them are experts at Oracle 18c! There isn’t a single expert at 18c on the planet. Not even in Oracle. To be honest, I would say there are very few people who could really call themselves experts at 12cR2 at this point. Why? Because it takes time to get good at stuff and even 12cR2 hasn’t been out that long. It’s about 1 year since it was released for use on-prem (see announcement). Yes, it was around on cloud for a while before then, but most folks have had 12cR2 for 1 year and that’s it. Most people writing about 18c have had it for a few days tops. 🙂

So you’ve got one year of experience at 12cR2 right? I’m not so sure. You see you’re probably spending a lot of time working on 11gR2 and/or 12cR1 instances, as well as the odd 12cR2 instance that has made if to production. Humans are pretty lazy, so you are probably still doing a lot of stuff “the old way”.

I mentioned on a recent mailing list conversation, my approach to a new version is as follows.

I’ve been doing this for a long time and this approach has served me well, but I still think it takes me a few years before I feel really confident with a new version.

I don’t think many of the good content producers throw around the term “expert” very often, but I think some of the people who follow can have unrealistic expectations when they look at content on the internet. Most people are writing about something new they are doing, so at the point they are writing it, they are far from being experts. If you’re lucky they will go back and revise that content when they learn more, but more often than not they don’t. As a result, you are often following the guidance of a first-time user. 🙂

So when you ask me to help you with your implementation of Data Guard between two 18c Exadata machines, you’ve got to realise how naive that question is. There will be lots of people and companies who will happily take your money to learn the new tech, but that’s probably the subject of another post… 🙂