Last night I went to the Midlands Microsoft 365 and Azure User Group. It was co-organised by Urfaan Azhar and Lee Thatcher from Pure Technology Group, and Adrian Newton from my company.

This event clashed with the Cloud Native Computing Foundation meetup. If the clash continues I’ll probably have to alternate between the events.

First up was Penny Coventry with “Power Automate AKA Flow Introduction”. The session started with an overview of various “Power” products, before focusing on some of the Power Automate features. This included a demo of building an automation flow. I’ve seen Amy Simpson-Grange demonstrating UIPath and one of my colleagues Paul demonstrating LeapWorks, and as you would expect, there are a lot of similarities between these automation tools. I don’t know if I’ll get to do any of this, but I do find it interesting. I’ll probably wait for my colleague Natalie to learn it, then bug her to explain stuff to me, so I can act like I know what I’m doing. 🙂

After far too much pizza and a doughnut (diet starts tomorrow) it was time for Tom Gough with “Azure Machine Learning with Power BI”. The session started with an overview of some of the Artificial Intelligence (AI) and Machine Learning (ML) services on Azure. The mention of data preparation and data cleansing was quite interesting, as people don’t really say a lot about this. You could be forgiven for thinking this piece just magically happens. There was a demo of using Power BI desktop to prepare some data containing user comments, connect to Cognitive Services and pull out some key phrases from the data, and presenting it in some custom visualisations. One of my colleagues has used this to do sentiment analysis on responses to a chat bot running in the Azure Bot Service. Pretty interesting stuff, and he tells me it’s very easy to get some basic examples working.

It seems every event comes with some more signs that this stuff is gradually creeping into our company. I’m not sure if I will be part of this world, but it’s certainly interesting to see.

Thanks to everyone who turned up to support the event, the speakers, and the sponsor Pure Technology Group. See you at the next event.

PS. Apologies to Richard Harrison, who had to endure me asking questions for ages, while he froze to death. Bring some masking tape or a restraining order the next time you come. 🙂

Last night I went to the Midlands Microsoft 365 and Azure User Group. It was co-organised by Urfaan Azhar and Lee Thatcher from Pure Technology Group, and Adrian Newton from my company.

First up was Matt Fooks speaking about “Microsoft Cloud App Security”. Matt covered a number of use cases, including shadow IT detection, log collection, checking compliance of applications and using policies to protect systems. He demoed a few of these. The flexibility of the cloud is great, but it also allows you to create a security nightmare as your cloud estate grows. MCAS gives you visibility and control over that. I guess the value of this will depend how far down the cloud journey you are. If you’ve got a bit of IaaS that’s being managed centrally, this isn’t going to sounds too interesting. Once you open the gates and let other people/teams get involved in provisioning services, you are going to need something like this to keep some level of control over the sprawl.

I heard one of the attendees mention Snowflake, so I collared him during the break to discuss it. I’m not so interested in the headline stuff. I care more about the boring day-to-day stuff, as people tend not to talk about it. It was a really interesting. Networking is great.

Next up was Richard Harrison with “The Journey from being a DBA Guy for 20 years to becoming an Azure Guy”. Richard was a fellow Oracle ACE before he moved in a new direction, so it was good to see him again. We spent some time chatting before his session, and I kept him for ages after the session chatting about a bunch of cloud related stuff. As the name of the session suggests, this was about his transition. What made him decide to make the move. His first opening into the world of the cloud. Some of the steps along the way and the amount of work involved. Richard is a smart guy, so when he says it’s hard work to keep on top of things due to the rate of change in the cloud, that should be a warning sign for people who are focused on the status quo.

There were some pieces that related nicely to the first session. For example, he discussed the control/governance aspect. To paraphrase, some services like security, budget management and databases are kept under central control, because of the critical nature of them, but people are given pretty much a free reign with platforms within their resource group. Why? Because there are loads of services with loads of features and trying to manage them centrally is practically impossible. I think of this as a move to a high-trust culture. Of course, you have tools to monitor what’s going on to stop people doing crazy stuff, but ultimately you have to start releasing control (where it’s appropriate) or people will look elsewhere. 🙂

I’m hoping Richard will come back again and tell us some more about what he is doing, and I know he’s got some really interesting Oracle-related content that will work really well at Oracle events, so hopefully he’ll throw his hat into that arena too. I don’t want to say anything more because I don’t want to steal his thunder.

Thanks to everyone who turned up to support the event, the speakers, and the sponsor Pure Technology Group. See you at the next event.

User Group Sunday started with the bridge run/walk. A group of us got a Ubers across to the visitors centre, then walked or ran across the bridge and back.

If I was really sad I would tell you it’s a great way to hatch Pokemon eggs and there are loads of Pokemon to catch along the bridge, but I’m not sad at all, so I don’t know this and I never did any of that… 🙂 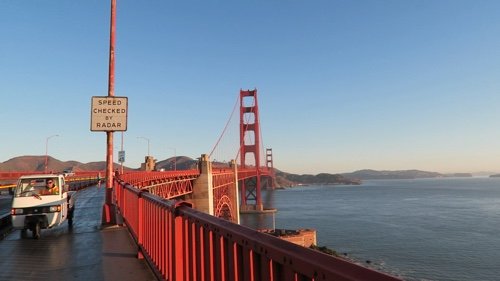 On the way back I was getting out my camera to video something, slipped on a metal grate and ended up on my back. I didn’t get hurt in the fall, but it was kind-of embarrassing. I slipped about 3 more times on the journey back, but managed to stay on my feet.

I got back to the hotel, cleaned up, then it was down to the conference. The “EOUC Database ACES Share Their Favorite Database Things” session, was a 2 hour session with a large group of speakers, all doing 5 minutes on their chosen subject.

I like this lightening talk format. It means you get to touch on loads of subjects and give people lots of pointers to things to look out for. It also means the user group can get loads of speakers up on stage, rather than just 2 each year!

From there I was feeling a little wasted and walked back to the hotel with Martin Widlake, both of us doing a good impression of grumpy old men…

Once I was back at the hotel I edited the EOUC video, then my neck started to feel really stiff and I got a banging headache. By about 18:00 it became obvious I wasn’t going to make it to the Oracle ACE Dinner, so I decided I was just going to have an early night and try to sleep.

I’ve checked out some of the photos of the Oracle ACE Dinner online and it looked really cool. I’m gutted I never got to go, but I’m not sure people would appreciate me having a Machu Picchu moment there. 🙂

After a ridiculous amount of sleep I feel OK today, but my neck is still really stiff. I’m starting to think I might have tweaked it during the fall on the bridge. Let’s see how today goes.