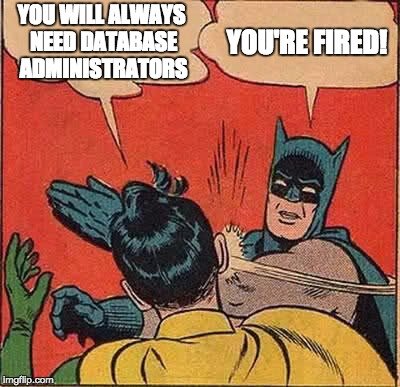 Before we start, make sure you watch the keynote and actually listen to what is said from a tech perspective (not the pricing stuff). Don’t prepare your counter argument before you hear what is said. Listen!

Myself and many others have been talking about this for over a decade. Most recently in my post before this announcement called No DBA Required.

As a cloud provider, Oracle want to make products as autonomous as possible because it reduces the amount of bodies they need to look after them and reduces human error. Yes, even the best of us screw up! It’s also annoying when you have a good product and stupid people use it badly, then blame the product. The aim of this suite of autonomous databases is to automate as much as possible to reduce the need for human interaction and free us from the mundane. There is an important slide at about 41 minutes that sums this up well. Less time on infrastructure, patching, upgrades, ensuring availability, tuning. More time on database design, data analytics, data policies, securing data. With the possible exception of tuning that can be interesting, let me put this another way.

This is firmly targeted at removing the need for operational DBAs. A role that *you* should have already automated out of your organisation anyway. If you’ve not, then you have failed.

It should be obvious that the Development DBAs are sitting pretty here. The thinkers are safe. The recipe followers are not. Your mantra from now on should be…

For context it’s worth mentioning a few things.

My view? Bring it on. Save me from the boring crap! 🙂

Update: Rather disappointingly, but as I expected, many people don’t seem to be able to look past the name of the service and are just making knee jerk reactions.

Also, there seems to be some perception that I’ve drunk the Kool Aid on this. I’ve been looking at the information about the service and I think it is interesting. Over time I will refine my opinion, as the facts emerge. What I won’t do is write it off before it’s even been released. It’s that sort of attitude that has turned some DBAs into inflexible dinosaurs. You’ve got to evolve or die people!

Update 2 : I’ve now tried the service. You can read what I thought here.