After the previous late night I was dreading the morning, but actually everything was OK. I woke up in plenty of time and felt fine. Pretty soon I got a message from Gerald saying he was down stairs waiting for me, and we got an Uber to the airport. We are both, “better early than late”, people when it comes to airports, so we arrived in plenty of time. Bag drop and security were fine, and with one little detour we quickly found ourselves having a drink and some breakfast, waiting for our flight.

The flight from Panama City to Mexico City was a little under 4 hours, but we taxied for what felt like forever before takeoff and after landing. It almost felt like we drove there. I watched a film called Morgan, which was sort-of about AI and quite predictable, but not bad. I also watched almost all of Rampage, which I thought was stupid, but fun. Anything with The Rock in makes me smile.

After landing in Mexico, the queue for security was huge, but luckily we were able to dodge it by using the automatic machines, but it just meant we were waiting for our bags for longer. 🙂

Bags in hand, Gerald let me piggy-back on his phone signal so I could order an Uber to my hotel. Initially the traffic was really heavy, but it soon opened up. I think it was about 45 minutes to my hotel.

I got into the hotel and once again I got another upgrade, and free access to the executive lounge. As I’m writing this I’m waiting to see what free food I can snipe from the lounge. Maybe I won’t have to pay for food tonight… 🙂 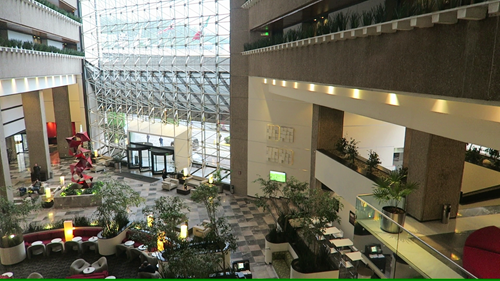 The plan is to go to bed early to try and make up for last night’s lack of sleep. Tomorrow will be a very long day because I go straight from the conference to the airport to fly home. I hope the first bit of the day is fun, because the second bit definitely won’t be…