Day 1 started stupidly early as always. I was playing around with 18c Express Edition (XE), seeing if I could run my demos on it for the talk I *thought* I had later in the day. I actually didn’t get it sorted, because I found a weird little issue that I dived into instead. 🙂 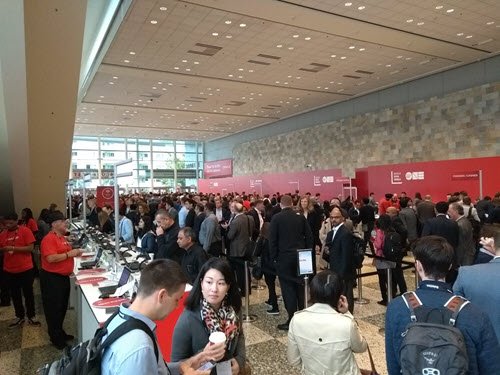 After much coffee and diet coke it was time to leave for my 09:00 Code One session. When I walked into Moscone West there were a lot of people queuing for registration, so I started to think I might be presenting to zero people.

I got there about 30 minutes early and started to set up, then noticed it wasn’t the session I thought I was doing. It was the session on Analytic Functions instead. I’m using the jet-lag excuse again… 🙂 The demos for this session were using SQLcl on my laptop, connecting to Autonomous Transaction Processing on Oracle Cloud, but of course this could have been pretty much any Oracle database from 8i onward. 🙂 I think the session went well.

From here on my timeline gets a little hazy, so some of these things may get reported out of sequence. Such is the state of my brain at the moment. 🙂 I didn’t have a plan for anything really. I just bounced between things. I apologise in advance for the terrible photography. These people are not blurred in real life. 🙂

I headed down to the “Groundbreakers Hub” in the exhibition hall of Moscone West. I did a little scan of the surrounding stands with Neil Chandler. We picked up some free t-shirts, which I’m pretty sure won’t fit me. 🙂

Next up I went to see Wim Coekaerts with “Oracle Linux : State of the Penguin”. I walked in and Wim said, “My biggest fan has arrived”. Insert manga-style schoolgirl giggle from me. 🙂 There’s a lot going on in the Oracle Linux world, specifically in the surrounding platform support. Wim covered a bunch of things, but there were some standouts for me. Oracle supporting/tracking Cloud Native Computing Foundation (CNCF), giving you the ability to deploy on cloud and on-prem. Oracle Linux preview of Kata Containers, giving you the feel of Docker, but the security of a lightweight VM. He also mentioned the Oracle Instant Client is now in the https://yum.oracle.com  repositories, so just a regular “yum install” to get the client with no additional click-through license. That seemed like a pretty popular move judging by the retweets I got. 🙂

From there I went across to see some of the lightning talks at OakTable World. I’m here on Oracle’s dollar, so I feel kind-of weird going to a non-Oracle event, which is why I tend not to spend too much time at OakTable World. When I got there I was pleasantly surprised to see Dad! I thought he would be off somewhere on a yacht, or riding through the desert on a Harley. 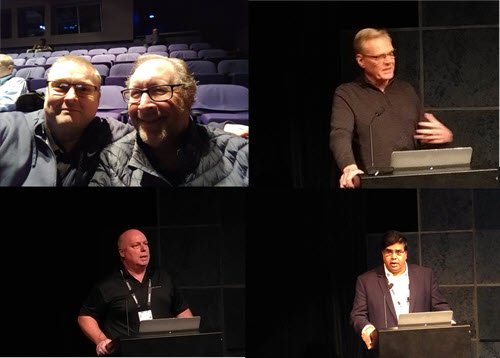 First up was the mighty John Beresniewicz with “NoSQL is anti-relational”, then “Average Active Sessions – Deeper Meaning”, where he gave a history of how the Average Active Sessions concept came into being. JB presents with such clarity. He’s awesome. That was followed by “Think Data, Not Database” by Arup Nanda, where he encouraged us to think of data in a wider sense (databases, spreadsheets and data in queues like Kafka) when we are considering performance and processing of data. The last lightening session I saw was Tim Gorman (the real Tim) speaking about “Data Masking”. He made some great points about the attack surface of non-prod (dev, test, UAT etc.) systems being much bigger than production, which of course leads to the question of how do you protect the data in them if you are using production data. Anonymisation and masking being part of the process.

I really like the lightning talk approach. I wish Oracle would bring this kind of thing into OOW. It would give more people a chance to speak, and you get a lot of good content in a short time. I’m mostly after pointers, not essays. 🙂

I tried to get food, but they were out of everything except chicken, so I headed back to the hub and got an icecream. 🙂 While I was there 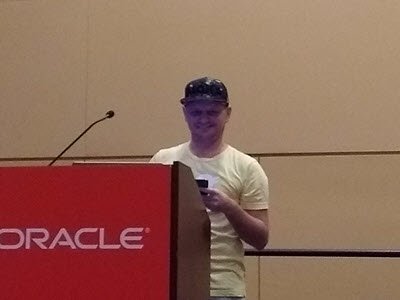 I bumped into Chris Thalinger and went along to see his session on “Performance tuning Twitter services with Graal and machine learning”. If you’ve not heard of it, Twitter is like Facebook, but with less functionality… 🙂 A lot of the technical stuff went over my head, but the message was pretty clear. Graal is cool and will improve the performance many applications running on the JVM, just by enabling it. In addition, Twitter were able to improve the performance of their workloads by using “autotune” to automate the tuning of the JVM parameters. Autonomous JVM anyone?

From there I went back down to the Groundbreakers Hub and basically hung around for the rest of the day, chatted to folks and did some of the demos. I disturbed my Son, who was trying to finish his slides. He gave me a quick run through, so I didn’t have to go to his session. I’m a terrible Dad!

From there is was back to the hotel to crash. I’m sure there were other things I could do, but it’s Monday and I already feel beat up.

Tomorrow (today by the time I post this) I have a session on “Cool New Features for Developers in Oracle Database 18c and Oracle Database 12c”, a five minute slot in “Even the ACEs make Mistakes – What did they learn?” and I think I have to go on stage at the Code One keynote between 17:00-19:00 to get a prize? Not sure I’ll still be awake by then. 🙂