The time has come to clean up my act. I’ve got loads of domains and loads of email addresses and it’s a complete waste of time and money, so I’m going to ditch the lot. As a result, I’m starting the arduous task of changing my email address. If anyone has my former email address and they want the new one, contact me on the old address and I’ll send it through.

It would be much easier if Oracle came out and admitted they’ve junked this platform, rather than paying lip service and not delivering on our support and updates contract.

I mentioned in my previous post that I had bought a NSLU2 network storage solution. It’s a Linux appliance, but it only supports samba, not NFS. When using it from Windows it worked fine, but mounting it from Linux left me with loads of permission issues, to the point where I could only really use it as the root user. After surfing on the net is seemed that this was pretty standard. Then I found the Unslung project, which changed everything.

Unslung is another version of the NSLU2 firmware, that allows you to install additional packages. I downloaded Upslug2, used it to flash my NSLU2 with Unslung-5.5, ran the unsling command and added NFS and OpenSSH support.

Now I have a NSLU2 running both samba and NFS. What’s more, I have SSH access so I can interact with Linux on the appliance directly, making it much easier to work with.

If you’re using Windows, chances are you won’t need to do this, but for Linux users I think this is a really good move.

Now I am really happy with my NSLU2, and all my storage is secure. I guess that means I can get back to Oracle for a while 🙂

I wrote a summary of some of the recent security posts (Basic Security Measures for Oracle). If I’ve missed something out feel free to drop me a line.

I’ve been doing some SQL/XML again today. It’s really quite simple, but when I’m away from it for a while I manage to convince myself it’s going to be a pain. Well the XML generation was no problem, pity defining the XML Schema wasn’t as easy. It looks like I’m going to get to play with this a bit more in the next few days.

I’ve just bought another 1G of RAM for my machine at home. It makes playing DVDs at the same time as running Oracle10g on a VMware virtual machine much easier 🙂 In the next few days I should receive my NSLU2. After my recent Windows fiasco I decided to get a bit more storage and a NAS to connect them to. It seemed like a much better idea than plugging some disks into the back of my machines. Time will tell 🙂

I have no problem using vi or gedit, but it’s really handy to edit remote files directly, rather than constantly FTPing files around.

When I’m working on Windows I tend to use UltraEdit as my main text editor, but I use Windows less and less these days, so I’m starting to use jEdit much more. It’s multi-platform, it’s open source and it has loads of plugins, including an FTP plugin to allow editing of remote files.

Just knocked together a quick run through some web scripting languages:

The examples are purposely brief and there is no mention of best practices etc. It’s simply meant to illustrate how to interact with the database.

I’m hoping this will save me having to repeatedly explain how to use bind variables.

I logged the issue on the relevant OTN forum and it was fixed in no time.

It looks like there are some outstanding issues with the Raptor SQL formatter. It doesn’t appear to work at all when editing a package, but it will work for a procedure or an SQL statement. When it does work it appears to have some odd ideas about how PL/SQL variables should be defined. This example shows one case:

It seems to be a little confused by the declaration section of the procedure. I’ve posted this on the support forum. I hope this gets fixed before the production release.

In addition to this, the SQL formatter is a little lacking in configuration options. 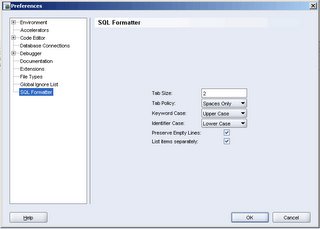 I guess everyone knows by now that Raptor has arrived now. I downloaded it and had a little play and here are my first impressions:

My initial impression is very positive, although it will be the New Year before I get to use the product in anger. I’m glad Oracle have resisted the temptation to build an “all things to all people” product. I find most IDEs annoying because of the shear volume of junk included. If Oracle keep it simple and keep it free this is going to be a bigtime winner.

I see no reason to pay for a product like PL/SQL Developer when you can use Raptor for free. TOAD may be a different matter though. Personally, I prefer Raptor’s clean interface to the clutter of TOAD, but if you are somebody that uses all the rubbish included in TOAD, then Raptor is probably not for you.

Over the last few months I’ve seen myself slip into a very negative frame of mind regarding Oracle products. Perhaps Raptor is a turning point. Keep up the good work!