I remember when Oracle added the ability to drop columns from a table. At the time I was writing loads of scripts to recreate tables in order to drop columns. Adding this feature changed my life!

You can see another example of this in MySQL 8. If you look at the new features list you will see a section called Account Management, that links to Using Roles. OMG! This is massive for me! I don’t really care about a bunch of the sexy stuff. The presence of roles is a game changer for me! 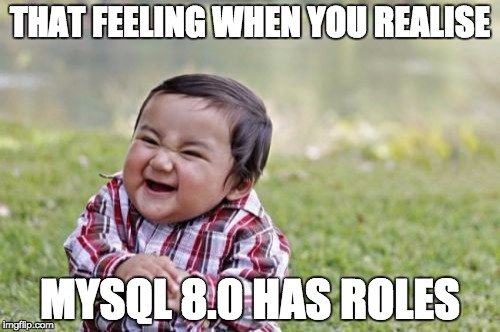 Captain Support was getting pretty sick of supporting the crappy old laptops his brother and mother were using, so he selfishly bought them 2 shiny new laptops to make his own life easier. The only slight flaw in the plan was they came with Windows 8. Although Captain Support had some previous experience of Windows 8 (Developer Preview, Consumer Preview, Windows Blue beta), he was a little nervous about unleashing it on his unsuspecting family members…

A week down the line and Windows 8, along with Classic Shell, seems to have gone down OK. Captain Support just taught his family the mantra, “If in doubt, press the Windows key!”, which in Classic Shell returns you to the desktop. What with that and the boot to desktop, it is just like using Windows 7, which is similar to Vista, which is what they both used before…

Captain Support also mentioned Classic Shell to one of his yoga buddies, whose dad was struggling with Windows 8. His dad was very happy with the result.

So if anyone at Microsoft is listening, now that Steve Ballmer has  moved on you might want to consider resurrecting the Windows 7 style start menu, not that crappy Windows Blue start button, to save people having to download 3rd party products to make your desktop work properly…

I totally understand the concept of the new front screen and the whole Metro thing. Trying to keep a consistent experience between a Windows phone and a Windows touchpad is sensible. Just like the iPhone and iPad. What I don’t like is the fact the tiles are massive and take up loads of space. It just seems a bit silly to me. Why make me sideways scroll when all the initial options could be seen on my 24-inch monitor anyway? From a desktop computing perspective, it is so much worse than the Apple Launchpad (which I also despise) or the GNOME3 Activities screen.

Since I’m running it on a desktop machine, my biggest concern is getting a regular desktop to work with. I can do this by clicking the “Desktop” tile. The resulting desktop is basically Windows 7, which is fine, *except* there is no regular start menu. Clicking the Start button takes you back to the crappy tiled front screen, or hovering in the bottom-left corner presents you with the new menu. What is on this new menu? Bugger all of any use! The search screen is like a really bad GNOME3 “Activities” screen. It requires so many clicks and mouse moves to get where you want to go. It’s wretched. If I were a regular user I think I would probably pin a whole bunch of apps to the taskbar and maybe define a few folders on desktop containing useful shortcuts. Surely the ability to run the old Windows 7 menu would be a welcome addition for the vast majority of users!

Every dialog now has a ribbon instead of a toolbar or menu. This may prove useful for the newbies as it displays functionality that may have been hidden in sub-menus, but for me it is a disaster. The top inch of very window is filled with a bunch of crap that I don’t care about most of the time.

Typically the early releases have lots of tracing code enabled, so I don’t expect the production release will be as slow as this developer release.

So what is the future of the desktop computer? The rumors are that the next iteration of Macs will be essentially running iOS. It looks like the next generation of PCs will be running Windows 8. Although both these OSes seem fine for phones and touchpads, neither of them seem appropriate for a desktop computer. Now I realize that I am by no means a typical PC users, so maybe the vast majority of the PC users of the world will be happy with these changes, but I for one think it is a massive step backwards. It is starting to look like the future of desktop computing is Linux. 🙂 Luckily, I’m already there.

Let’s hope a little sanity returns between now and the production release of Windows 8. If nothing else, just give us a proper menu, or fix that God awful search screen.

Update: Check out these hacks to restore the Windows 7 style menu.

PS. Let’s see if I end up contradicting everything I just said in a few months time. 🙂