I’ll be attending the following events.

The tour carries on without me (I had already committed to another event in Europe) to the following locations.

I’m feeling pretty nervous about the travelling. The Dubai to Auckland flight alone is 16+ hours. It’s a long way to go for such a short visit, but I’m sure I will enjoy it when I’m there. 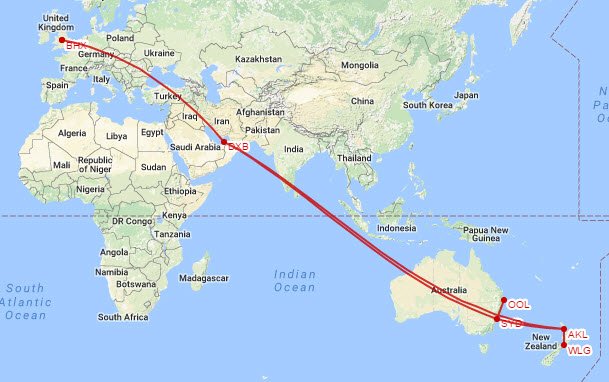 I did try to upgrade the flights to business class, but there were no seats left. I’ll keep trying. It will cost me a lot of money, but it will make the whole traveling process a lot more pleasant if I can sort it out.

Hopefully I’ll get to see you there. I’ll be the guy asleep on the floor with his tongue hanging out… 🙂

The Melbourne class was a little bigger than the previous classes, with 12 people including several people from Oracle Support. Being the 3rd class in quick succession, everything felt really smooth, with no real surprises.

I actually managed to get a reasonable amount of sleep before both classes, which was a bonus. Saying that, I fell asleep at 20:00 last night, so I ended up waking up at 03:00, which gave me some time to play catch-up with emails and forum questions. It does mean that today will end up being a pretty long day, since my flight to Hong Kong isn’t until 00:15 (including a slight delay).

Apparently there have been typhoon warnings in Hong Kong and the schools have been closed, but surprisingly it hasn’t really affected flights. Let’s see how that works out.

This was my third visit to Australia, but only my second visit to Sydney and Melbourne. The real take-home message from this trip is I felt really at ease all the time I’ve been in Australia. I’m not surprised a lot of British people decide to move to Australia. It’s probably one of the easiest places for a Brit to relocate to.

Update: I’m in the hotel in Hong Kong now. No signs of a typhoon, but I’ve received a mail saying the class may be cancelled if the weather is too bad. Weird. I’m just off to lunch in the tallest building in Hong Kong, or so my mate tells me.

I’m now sitting in my hotel room in Melbourne, so the Sydney experience is complete.

Originally I was told the Oracle University classes would be cancelled if there were less than 10 people. In Singapore I got 9 people, which was the smallest class I had ever taught for Oracle University. I immediately beat that record in Sydney by having 7 people in the class. I’m guessing that from an expenses point of view, the costs are lower because I’m doing four courses in what amounts to a single round trip to Australia. If this were just a single class requiring a requiring a return flight from UK to Sydney it wouldn’t have happened. Anyway…

Day 1 went smoothly. I got a few questions that made me think, which is always good. Once I had finished the class, it was straight off to the train station to get into town to speak at the Oracle Meetup organised by the Pythian guys. The train journey took longer than I expected, so I arrived about 20 minutes late, by which point the projector was irretrievable locked away. So instead I did my presentation with my laptop pointing at the people around the table and did a lot of zooming. 🙂 Despite this setback, which was totally my fault, it seemed to go OK.

It’s always good to meet new people, but I was especially happy to finally meet Nuno “Noons” Souto and Gary Myers, whose blogs I’ve been following for ages and who have both helped me in the past by correcting my numerous mistakes. After the presentation finished and we had an informal chat, it was back to the train station and then the hotel.

Day 2 of the course went smoothly enough. I had finally got something resembling sleep, so I felt a bit more on top of my game. As always, I over ran. If they gave me 3 days I’m sure I would still over run. 🙂

This morning was a 06:30 flight to Melbourne, so I had to get up at about 04:00 to get ready and get the taxi to the airport. I actually woke up at 03:00, so I guess I’m going to feel a bit rough later. Luckily I’ve got the rest of the day off to recover before I start the Melbourne class tomorrow.

Melbourne was the first class to confirm, so I’m guessing it has a minimum of 10 people, but you never know. Perhaps I can break my record again. 🙂

On a slightly worrying note, I’m having a bit of trouble with my credit and debit cards. I warned the banks involved that I was travelling so my usage might look a little odd. I also banged some cash onto them to preempt any problems with bills coming in while I was away. Even so, it’s all been a bit random as to which cards are accepted and which cards fail. If all else fails I’ll get Larry to fly me over some cash… 🙂

The plane journey from Perth to Melbourne turned out to be very productive. I’ve made some substantial changes to my presentation. The content is the same, but as I suggested in my previous post, I’ve de-emphasized some bits and emphasized others.

I guess my presenting style is based very much on the way I write articles on my website. I’m not a fan of reading overly “wordy” articles. Instead I want a cut & paste example that gives me a feel for the feature/issue. I can then play around with that to get more familiar with the technology.

Well that works fine for a lot of database and development presentations, but not all of them.

This particular presentation has two distinct halves. The first half really doesn’t lend itself to demos and the copy & paste mentality and the second half does. It’s still early days for me as far as presenting is concerned, and this presentation has reminded me of that again. Fortunately there are a few old hands around that give some pretty good advice.

So what I have now delivers the message I want to deliver, but I think does it in a much more sensible way. I’m a bit annoyed I didn’t see this before I presented in Perth, because it didn’t take much time to repackage, but that’s life. Sometimes, when you are too close to something you can’t see the wood for the trees.

So in a few minutes I’m off to get a plane to Canberra to do a presentation to a local user group. I’m not totally sure yet how much time I have to present, so that one will be a bit more “seat of the pants”. 🙂

I’ll be back in Melbourne tomorrow where I will hopefully get to see a bit of the city before the next AUSOUG event starts.

My last post might have left people with a negative view of the Gold Coast, so I hope this post goes some what to change that. Pretty awesome… 🙂

I arrived yesterday afternoon in the Gold Coast and got a bus to my hotel, the Conrad Jupiters Casino. My first impression of the Gold Coast was not too good. It is essentially a big holiday resort. The fact I was staying in a casino gave me a bit of a flashback to Vegas.

On arriving at the hotel I noticed there was a pool, so I went straight out and had a swim. This made me feel a little more positive. Then I noticed there was a gym with a room where they teach fitness classes. The room was empty so I went back to my room, got my Yoga mat and did an Ashtanga practice. It was cool not having to practice in my hotel room. Too many distractions. After this I was feeling up for a wander around.

After leaving the hotel I walked through a shopping center and a restaurant area, then out on to the beach. This is when I realized I was going to like the Gold Coast. The beaches are long and wide with white sand. It is the perfect place to bring kids on holiday, hence the holiday resort developments. I’ve got 2 days before the conference starts so I’m going to spend my time between the beach, the gym and the pool. I’m going to try and blank out the casinos and holiday resort feel as they will only spoil it for me.

I would post photos only the hotel internet charges are extortionate, so I’m using a public terminal. Unless I get internet access at the conference, I probably won’t be online much until I reach New Zealand.

I got to Perth airport about 2 hours early, attempted to check in and was told I couldn’t until I paid the outstanding balance on my ticket. [Insert flashback to Frankfurt here] I called Oracle Travel and a couple of minutes later it was sorted and I got on the plane and survived the flight. Did you hear about that Qantas flight? That was on the taxi radio and the TV at the airport before I flew. 🙁

I had booked the cheapest hotel in Sydney (CBD) I could find on wotif.com. I got off the plane and became increasingly worried that I had booked into a crack-house, but it turned out really cool. It’s a pretty small place above a pub in the center of town, but the room is really cool. I wonder if they will give me an extra discount because I’m unemployed? 🙂

I went down to check out the harbour and took a ride on the Manly ferry. I know it’s a bit stupid, but the opera house is so iconic, I really feel like I’m in Australia now.

It was getting dark by the time the ferry came back from Manly.

I walked home through a park and saw a bloody big rat. I was going to photograph it and make some joke about Quokkas, but I was too slow. A little further on I heard a noise in a tree and saw something a little cuter than a rat.

Tomorrow is my only full day in Sydney before I go on to Gold Coast, so I’ve got to figure out what to do to make the most of my limited time.