I mentioned yesterday, I had helped some people with setting up Oracle Cloud. Since I was awake I grabbed some screen shots and wrote a couple of small posts so I could forward them to one of the folks, so they could remember what we did. These along with a couple of other posts I released a few days ago pretty much show how we set up a demo environment in a few minutes..

Like yesterday, the meeting was covered by a Non-Disclosure Agreement (NDA), so there isn’t really anything I can say about it, but during the briefing we were told Oracle Database 18c Express Edition (XE) had been released for download. I had previously done an 18c RPM installation on Vagrant, so it was pretty simple to modify it to do the XE installation in a similar way and leave it going while I was watching the sessions. Yay! Go automation! 🙂

I did my thing of not eating again, so I could stay awake during the meeting. By the end of the last session I felt pretty hungry, so I picked up a bag of cheese flavoured popcorn and downed that before heading to Chipotle (again). I think I’m done with Chipotle now. My vegetarian burrito had a huge chunk of meat in it, which I bit into and spat out. If it had been at the start of I would have demanded a new one, but as I had nearly finished I just walked up to the counter and said, “This is a vegetarian burrito and that is meat. Sort yourself out!”, then left in a bad mood.

I got back to the hotel and had about an hour before 19:00, when I was meant to go and meet people at some place about a block down the road. I made the fatal mistake of lying on the bed to watch TV for a bit, and waking up at 04:00 the next day. Sorry folks! 🙁 The fact I slept for about 10 hours, which is extremely rare for me, kind-of shows you were I was at by this point. 🙂

So that’s the first two days of briefings done. Tomorrow (today by the time you read this) is a “day off”, but I do have an event in the middle of the day and a dinner in the evening. I’ve also got to go through my three (and a bit) talks, because once the conference starts, there’s no telling when I will get time…

PS. I was forced to “disappear” Maria Colgan from the family because she came into the room and didn’t come immediately to say hello to me. If she is really good, and I don’t replace her with someone else, she may be allowed back into the family at some point in the future… 🙂

For those that never quite understood what an Oracle Developer Champion was, don’t worry about it because it doesn’t exist anymore. We are now called “Oracle Groundbreaker Ambassadors”. I think I’m allowed to use this logo now. If not, I might not be one for much longer… Doesn’t matter. I’ve got the swag now. 🙂 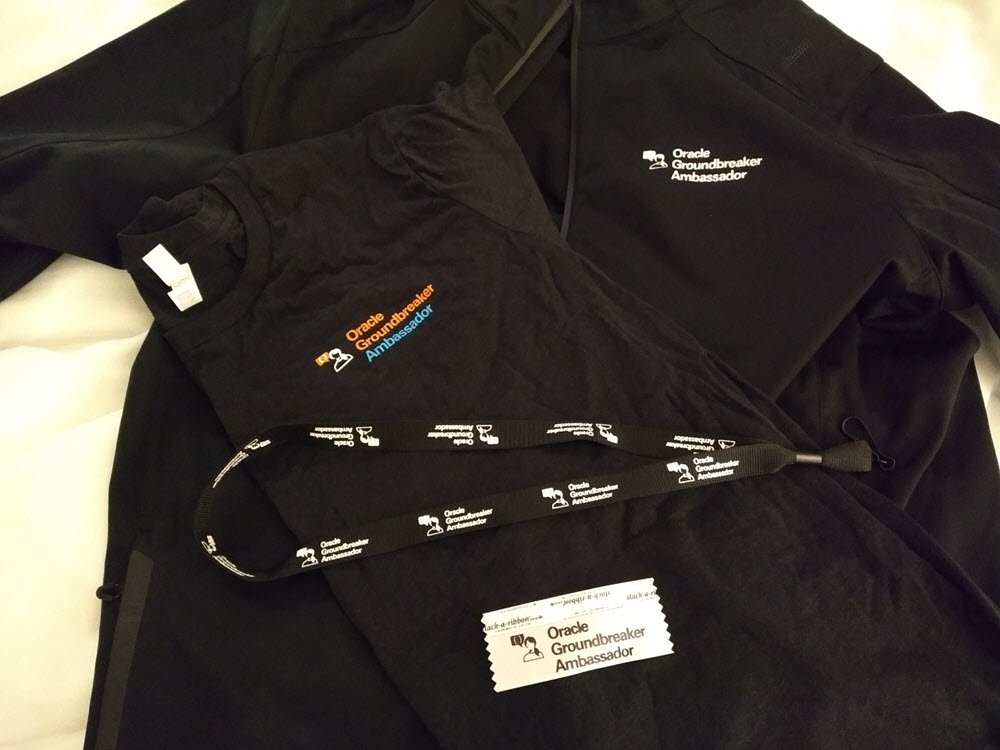 If you’ve followed my posts in previous years, you’ll know we sign non-disclosure agreements (NDAs) before we can be part of these briefings. They contain three distinct types of information.

It’s sometimes a bit of a mine field to know what you can and can’t say, so I take the attitude that I’m saying nothing, even the things I think I can share, until I’ve heard someone say something on stage, or seen it in the documentation. I don’t need the stress, just to beat people to the punch by 2 days. After all, until it is generally available (GA) it isn’t real as far as I’m concerned. 🙂

Jen nominated me as Oracle Cloud support guy for the day. 🙂 I was helping a couple of people with their Oracle Cloud trials, and one person with ORDS authentication. Having a bunch of people in the room to share ideas and advice is really cool.

It was a long and busy day, that covered a lot of areas. I’m a generalist, so there are a lot of things that are relevant to me. I know some of the more specialised folks can find it quite difficult to stay engaged. It is what it is. 🙂

I avoided food all day, and drank loads of coffee and diet soda, so the time difference didn’t hit me so hard. At about 17:30 we got the coach from Oracle HQ in Redwood City to San Francisco. I dumped my stuff in the hotel room and went out to grab something quick to eat (Chipotle 🙂 ). Pretty much as soon as the food hit my stomach, my body and brain switched off. I went back to the hotel and crashed.

That was day 1 of the briefings done. Tomorrow (today by the time you read this) is the Oracle ACE Directors Briefing. Fun, fun, fun!

Today was Day 2 of the Oracle ACE Director Briefing.

As with yesterday’s post, we had a number of speakers coming in to talk about specific areas of the Oracle stack and Oracle Cloud. Once again, I’m not going to mention any details.

There were a few areas that were super-relevant to what’s going on with me at work, so it was good to make some more contacts in those areas.

The shear volume of stuff going on at Oracle at the moment is actually quite scary. I’m sitting in the sessions wondering how I’m going to do my job, learn all the new regular Oracle stuff and learn all the new Oracle Cloud stuff as well. It’s quite daunting…

Thanks to the folks at the Oracle ACE Program for making this event happen. This last two days has been like a full-on conference, complete with multiple tracks. Your efforts are greatly appreciated. Thanks to all the speakers too. I know we sometimes give you a hard time, but we do appreciate you taking the time to come and speak to us!

I’ve got tomorrow off, then the crazy world of Oracle OpenWorld 2016 starts!

Today was Day 1 of the Oracle ACE Director Briefing.

After some food and some quick hello’s, we jumped straight into a session by Thomas Kurian, giving us a “State of the Union” type presentation, what’s coming in the next few days, weeks, years etc. This helps you focus on the things to look out for during the OOW conference, as well as get a feel for the main message of the event. I guess you all know what that will be. 🙂

After that we had a number of speakers coming in to talk about specific areas of Infrastructure as a Service (IaaS) and Platform as a Service (PaaS). I’m not going to mention the speakers or the subject matter as it might allow you to guess what some of the OOW announcements will be and I really don’t need that drama in my life. 🙂

As always, the questions from the audience were “probing” and the discussions that followed these questions were rather “passionate”. 🙂 I think one of the big things the ACE program can add to Oracle is honest feedback about what we as customers think about their products and their focus. In some cases it can be hard for Oracle to hear this, but it has to be done!

It was a good first day and I hope the speakers enjoyed it and didn’t feel we were being too hard on them. 🙂 As always, it’s great to meet up with the other ACEDs. There are more each year, but we are still quite a small group of people really.

PS. I managed to deliver the teabags and Marmite to my dad!