I woke up today feeling super-nervous. It wasn’t the event making me nervous, but the day in general. Doing the Mexico City event, then having to going straight to the airport to fly home.

Because of my free hotel upgrade I got to have breakfast in the executive lounge. I don’t normally eat breakfast, and I try to eat very little on conference days because I don’t want to fall asleep in my own sessions. 🙂 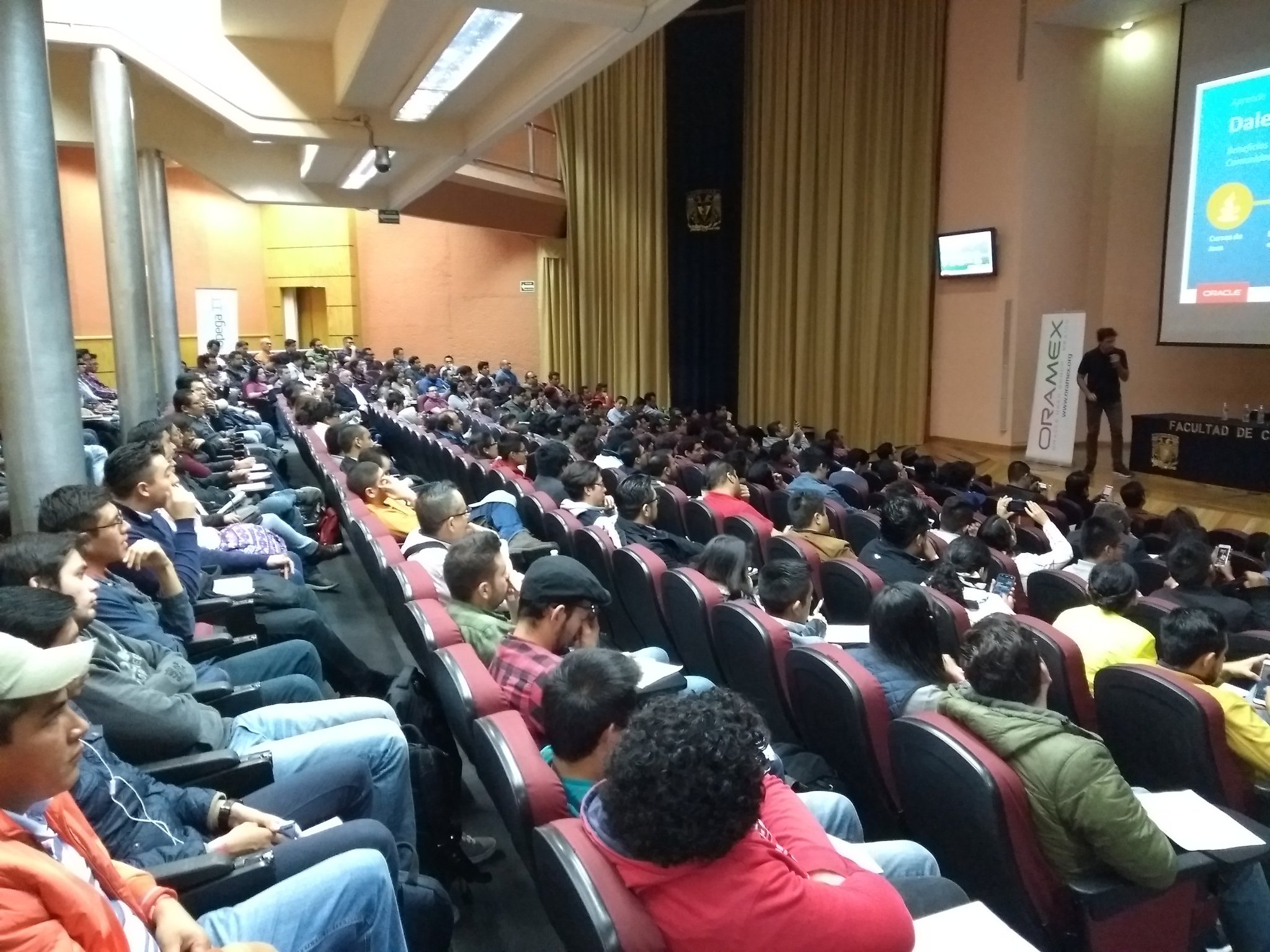 Once I had checked out of the hotel I got an Uber to the venue and met up with everyone and got a few photos. There were the normal introductions to the event and the introduction to the Oracle Developer Community by Pablo, then the sessions began.

My first session was DBA Does Docker, which is what I wished I knew for the first 45-60 minutes of my time using Docker. The room was full and the session went well. I got some questions at the end, so I was happy with it. I took a few photos with people at the end as well, which is always good for my ego. 🙂

Most of the sessions were in Spanish, except for Gerald’s which I had seen multiple times, so I took some pictures and chatted to people rather than watching it again. Sorry son! 🙂 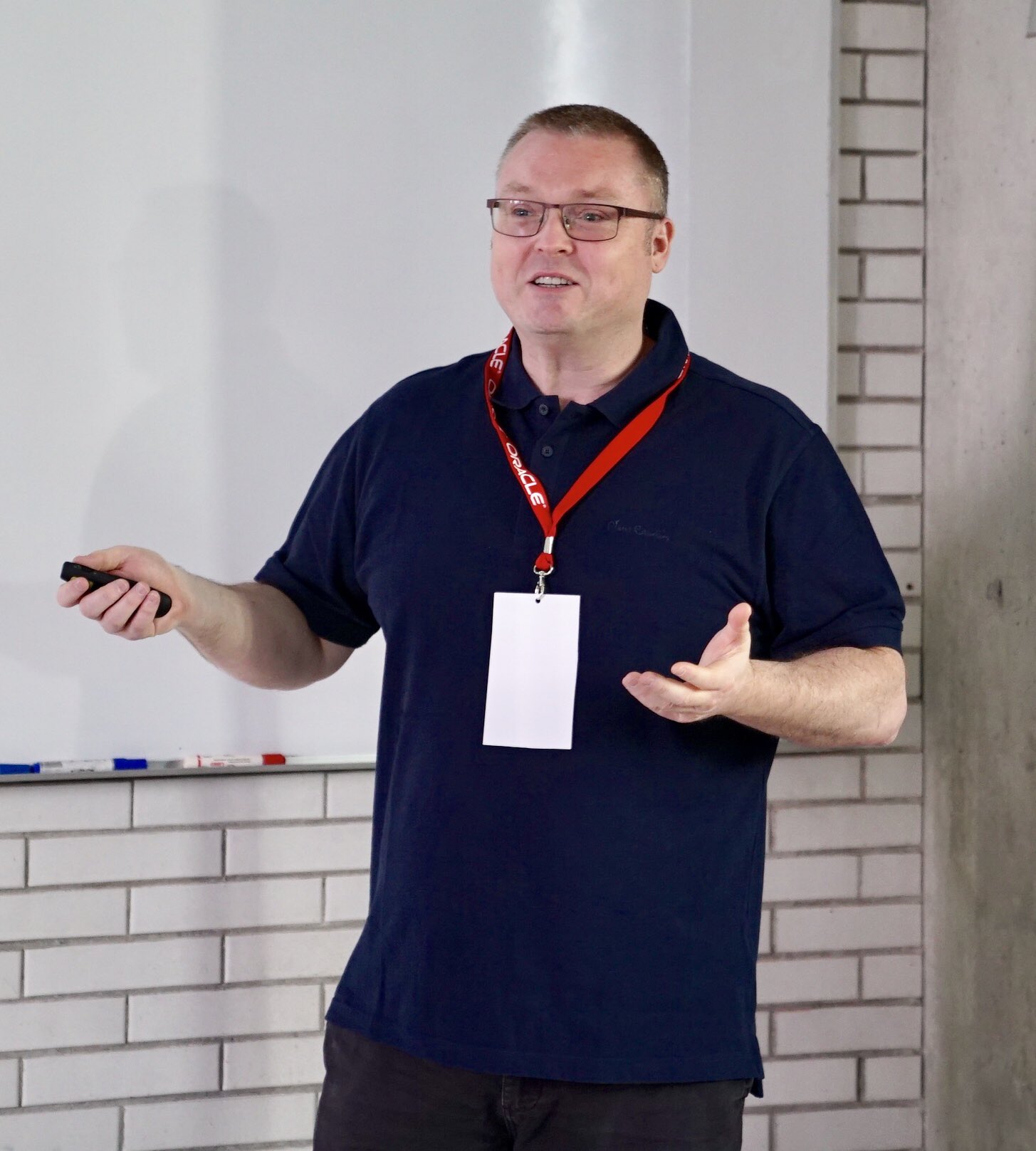 My second session was Make the RDBMS relevant again with RESTful web services and JSON. I had a full room again and a got a few laughs, so I think it went well.

From there I had to say my goodbyes and head off to the airport for my flights home. Just as I ordered my Uber the sky opened and it started to rain like crazy. I stood in the doorway of the University until it subsided and made a dash for the meeting point. I got to the car OK, but the journey home is the subject of another post. 🙂

Thanks to everyone in Mexico for inviting me to the event and letting me geek-out with you all. I’m sorry my stay at the event, and in Mexico was rather brief. I hope to see you all again soon!

Yesterday we had a day off in Mexico, so Rene took a group of us to see the pyramids at Teotihuacan.

As we arrived some men started a fertility ritual, which involved them swinging around a pole on a rope. One of the guys was playing a drum and blowing a whistle whilst swinging around. You can see it in my video.

As we entered the main site there were loads of people selling trinkets, including little wooden devices that make the noise of a Jaguar growl when you blow into them. From that point on the visit was punctuated with kids making Jaguar noises and blowing whistles. 🙂

At the entrance there is a small pyramid with quite steep steps. I walked up those and felt a little out of breath, which made me wonder how I would cope with the big one. Walking down the steps was a little unnerving too.

I love the look of stepped pyramids! They look so organised and symmetrical. As you are walking around you start getting a feel for the scale of the site. We were walking between two of the pyramids and someone commented that we didn’t seem to be getting any closer. 🙂

When we got to the big pyramid (Pyramid of the Sun) I just went for it. The first layer had quite steep steps, which are harder to deal with when you have little stumpy legs like me. The next two layers had smaller steps, so they were much easier. I’m not gonna lie, I was out of breath, but it was not as bad as I was expecting considering how unfit I am at the moment. The view from the top was awesome. Photos and videos never do this stuff justice, but hopefully you will get some idea from the video I posted.

For the most part, walking down the big pyramid was OK because there was a guide rope to hold on to. At one point there were about 10 steps that were much steeper than I remembered on the way up and there was a queue for the guide rope. Some of the braver souls just walked down without the rope. I took the kids approach and just shuffled down over the edge on my ass, until I could grab onto the step behind me. 🙂

Just as we started to head back to the car the rain came. It has been an overcast day, but warm, so the cool rain was quite pleasant. I thought I had brought sun cream and bug spray, but I had brought two lots of bug spray. Because of my cap, my head and face didn’t burn much, but my forearms got roasted.

We drove back to the city, got some food, then it was back to the hotel to crash. I had to soak my arms in cold water to try and reduce the burning…

Many thanks to Rene for being a great host. We really haven’t had to organise anything during the Mexico leg of the trip because he has done everything for us!

The person who had the hotel room before me set the alarm for 04:00. 🙁

I met up with Debra in the executive lounge at 06:30, grabbed a coffee and some food, then we went down to meet Rene for our lift to the event. Along the way we picked up Alex and Kamran.

We got to the event in plenty of time and it looked like a mini-OpenWorld. 🙂 I chatted with a few people, then I had to go and setup for the keynote…

Doing a keynote about SQL and PL/SQL can be quite nerve-wracking. You start to wonder how many people in the audience use other technologies, or how many are students that don’t have the prerequisite knowledge. I would rather do a more general session as a keynote, but this represents a different challenge.

Originally my slot for the keynote was 40 minutes, but based the mixed audience, I dropped out a few of the demos and a couple of the more complicated slides, which allowed me to claw back a few minutes. I finished in 27 minutes, so we were 13 minutes closer to being back on schedule. 🙂

I think the session went well. I managed to get a few laughs and I got some questions and nice comments at the end, which was good. 🙂

From there I went to see Debra‘s session on “Upgrade or Migration to Oracle Cloud Fusion Applications. Debra had a mixed audience, so she altered her session to fit. Essentially she set the scene for what cloud apps are and why they are interesting for businesses.

The next session I went to was Alex Zaballa presenting “The Best Oracle Database 12c Tuning Features for Developers and DBAs”. This was a tour of the 12c new features (mostly) related to tuning. Alex also included a quick demo of SQLcl, which should make Jeff Smith and Kris Rice happy. 🙂

After a short break it was time for Tim Gorman to present “RDBMS Forensics: Troubleshooting Using ASH”. He presented two case studies, both reporting the same errors, but being caused by different things. He talked through the process he followed to identify the root cause, in both cases using ASH to find the smoking gun. Tim has got a really good presenting style, which is really easy to watch.

There was a speakers lunch, then it was back to the sessions, with Tim Gorman speaking about “Three Types Of Table Compression”. He started with a basic explanation of compression algorithms, then moved on to talk about a variety of Oracle functionality, including table compression. Once he covered the theory, he moved on to discuss a case study involving compression.

The only English speaker for the next session was Alex, and I had already seen his presentation in Costa Rica, so I took a session of down time. 🙂

From there is was my last session of the day, which was me talking about Oracle databases in the cloud. It was a fun session, and a nice one to close the day with. Not too heavy.

After the conference presentations were done, we all got together for the wrap-up session. We got to have a quick chat with people, say goodbye and get some photos with people.

After the event was over we went straight out for dinner. I think a lot of us were super tired, but it was great food with great company and a really nice end to a really enjoyable day. Thanks to Rene and everyone from ORAMEX for inviting me, asking me to do the keynote and making everything run so smoothly. It was a fun day!

My day started quite early. I’ve been trying to sort out a problem at work and yesterday I reached out to Richard Harrison for some advice. I woke up to see his response, tried his suggestion and it fixed my problem. Happy days! This is why networking and community is important. Access to the “Hive Mind” makes life so much easier. 🙂

At about 07:00 I headed down to breakfast to meet Debra and Kamran, then it was back to the room to do a bit of blogging and video editing. Pretty soon it was time to leave for the airport, so Debra got us an Uber and off we went.

With the exception of a couple of ignorant queue jumpers, check-in and security were fine. We got through really quickly and parked ourselves at the departure gate. I had enough time to finish editing the Costa Rica conference video and it actually uploaded on the free airport wifi. 🙂

I got lucky with the seating on the plane and got a two-seat exit row to myself, which allowed me the elbow room to use my laptop, as well as film some of the scenery from the window. I have to have an aisle seat, which means I can’t always get photos or video from the plane, which is a pain. The extra space on this trip was welcome and made the three hour flight feel pretty easy. There were a few patches of turbulence, but everything was fine.

We were met at the airport by René Antúnez, who took us to our hotel. Debra has God status at the Hilton, so I got to tag along with her and check-in at the executive lounge. When I went to my room it was really nice, but I could smell cigarette smoke. I went back to the executive lounge, had some food, then they gave me a different room, or should I say a small house. They upgraded me to a junior suite, which is massive. There are perks to travelling in the same party as Debra. 🙂

I went to the gym for a quick workout and now I’m back in my room. It’s an early start tomorrow for the Mexico City event. See you there!